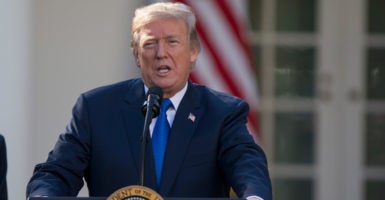 President Donald Trump speaks in the Rose Garden when announcing his nominee for chairman of the Federal Reserve, Jerome Powell, on Nov. 2. Trump trails his predecessors in securing Senate confirmations for his nominees. (Photo: Alex Edelman/CNP/Newscom)

Fewer than half of President Donald Trump’s executive branch and judicial nominees have been confirmed by the Senate—the lowest number of confirmations in the past four administrations at comparable points in their presidencies.

The dismal numbers—a total of 223 confirmations of 519 nominees—were circulated by the White House amid complaints of unprecedented Democratic obstruction and the Senate’s lax schedule.

Trump has 175 pending nominees awaiting action from Senate committees and another 101 on the Senate calendar awaiting a confirmation vote, according to the White House.

“Personnel is policy. In delaying the confirmation of President Trump’s appointees, the Senate is directly limiting the president’s effectiveness,” the Conservative Action Project argued in an Oct. 10 letter.

Senate Minority Leader Chuck Schumer, D-N.Y., has used delaying tactics, such as the maximum of 30 hours of debate on nominees, to slow down the confirmation process of Trump picks. That glacial pace means as few as two to five nominees are getting roll call votes each week.

“If this continues, it will take us more than 11 years to confirm the remaining presidential appointment[s],” Senate Majority Leader Mitch McConnell, R-Ky., said earlier this year.

Democrats forced more than eight times as many cloture votes in the Senate at this point in the first year of a presidency than any other Senate minority going back to President George H.W. Bush’s tenure in 1989. Further, the 51 cloture votes for Trump nominees is more than all of the past four predecessors combined through their entire administrations.

Senate Democrats have even used procedures to block noncontroversial nominees. Six of the cloture votes were required to get votes on nominees who passed on the Senate floor with more than 90 votes, two with more than 85 votes, and one with 79 votes.

While those tactics have slowed the confirmation process, Democrats alone aren’t the problem, according to the Conservative Action Project, which released a letter last month imploring the Senate to move more quickly.

“The slow pace of Senate confirmations is exacerbated by the Senate’s continued insistence on working no more than 2 ½ days a week—arriving on Monday evening for a handful of votes, and departing, on average, by 2:30 p.m. each Thursday afternoon,” wrote the 133 conservative leaders who signed the letter. “Previous Senates worked harder.”

The short Senate workweeks and Schumer’s delaying tactics have resulted in 118 fewer conformations for Trump than the next closest administration, dating back to 1989. Three of Trump’s four predecessors had more than 65 percent of their nominees confirmed by this point in their presidency, while Trump has just 43 percent confirmed.

Dating to 1989, only President George H.W. Bush saw the Senate receive fewer nominations by this point in the first year of an administration. However, the first Bush had a much higher confirmation rate.

The Senate has received 519 nominations from Trump and confirmed 223.

George H.W. Bush got the same 74 percent confirmation rate by November 1989, getting 341 confirmations out of 463 nominations through the Senate.

For the entire single four-year term of George H.W. Bush, the Senate had only one cloture vote for a nomination. George W. Bush saw only four cloture votes during his eight years in office.

The Senate cast 10 clotures votes for Clinton nominees and 17 on Obama nominees, both two-term presidents, according to White House statistics.

The signers of the Conservative Action Project letter urged McConnell to challenge the Democrats’ tactics by staying in session longer.

“[I]f Democrats are going to insist on all post-cloture time to be run, Majority Leader McConnell can easily make this painful for them by forcing continuous session overnight and through the weekend,” they wrote. “If the Senate stayed in session continuously for a week (including the weekend), they could confirm up to five nominees every week even if Democrats made them run the full post-cloture time on each nomination.”