The Consequences of Historical Ignorance 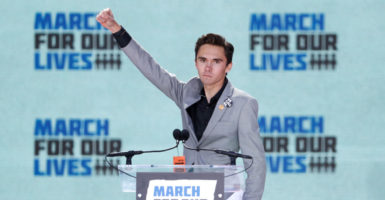 America is suffering through a crisis in education, especially when it comes to history.

Many were horrified when a poll, released in April, showed that two-thirds of millennials don’t know what Auschwitz is, despite the fact that it was the most notorious Nazi death camp in World War II.

That was hardly the only worrisome poll of late.

Americans should be outraged that our schools have failed to teach even the most basic historical facts to the younger generations. Worse, the education they receive has often only turned into a justification for superficial social activism, lacking in depth and veracity.

David Hogg, the teen survivor of the February school shooting in Parkland, Florida, who became a gun-control activist, exemplifies this worsening problem. He recently tweeted:

Throughout history violence and war only creates more of itself for example WWI->WWII->Cold War ->Korean War->Vietnam and up to today. While nonviolent moments like Gandhi’s, the suffrage movement or Civil Rights movement lead to peace and long lasting change. Ours will too.

This is little more than bumper sticker history, demonstrative of Hogg’s historical illiteracy.

For one thing, it’s unlikely that Gandhi’s pacifism would have been of much use against the Nazi war machine. People willing to put other humans in ovens are unlikely to be moved by passionate pleas for peace.

It should be noted, too, that Hogg’s two examples of nonviolent movements succeeding—Gandhi’s Indian independence movement and the U.S. civil rights movement—were not exactly nonviolent.

The Partition of India was incredibly violent, and led to the deaths of hundreds of thousands and perhaps millions of people. And the civil rights movement certainly wasn’t an entirely nonviolent affair, either. The rights of many black Americans in the late 19th and early 20th centuries were secured almost entirely by gun ownership.

These so-called nonviolent movements occurred in countries with a tradition of respecting the rule of law and individual rights, giving them an actual chance to succeed through ballots instead of bullets.

In China, nonviolent student protests in the 1980s were crushed by the state—literally in the case of the Tiananmen Square protest. Historically, repression has been the norm, not the exception.

For Americans, the right to speak freely and protest was only secured because young men, mostly teenagers, were willing to take up arms—arms that Hogg and others have so relentlessly crusaded against—and risk their lives to fight for their God-given liberties against the British Crown.

At one time, every American would have known this and would have acknowledged the blood and suffering of the Revolution that secured our freedom and independence.

War is a terrible thing, but it is often just and necessary, and it has certainly served to stop tremendous evil in this world.

To deny that is absurd.

Despite the clear gaps in his historical knowledge, Hogg hasn’t shied away from insulting the civic acumen of others and hectoring them. He once said, “Our parents don’t know how to use a f—ing democracy, so we have to.”

Not content to simply insult his parents’ generation, he then followed up in a later interview claiming that those who were against him were on the wrong side of history—a history that his generation would presumably be writing.

“Regardless of what your opinions are or where you come from, you need to realize we are the future of America,” Hogg said in an NPR interview. “And if you choose not to stand with us, that’s OK, because you’ll be on the wrong side of the history textbooks that we write.”

If that’s so, then future history textbooks will look more ideological and baseless than accurate portrayals of the historical record. But perhaps that’s because many current textbooks are, too.

Americans are free, regardless of their education or knowledge level, to use a public platform to espouse their views. At the same time, it’s hard to have a substantive and productive debate on the issues of the day when even the most basic facts of history are unknown to those doing the debating.

Platitudes begin to sound like profound insights when one has an extremely narrow view of history and world events.

It would be nice to see a little more humility from those who have such an incomplete understanding of that history.

Nevertheless, we have only ourselves to blame if we are not doing more to fix the increasingly deplorable state of American schools.

We must admit that the public school education model is failing our youths, despite how much money we’ve pumped into the system.

We should take it upon ourselves to improve our republic through better schools—perhaps charter schools, or even better, private schools funded by caring parents who increasingly can use vouchers or education savings accounts to escape the current institutions that have failed them.

Currently, many of our schools don’t meet even the basic requirements of what Americans need to be informed citizens. Worse, the education students are receiving, especially in civics, is heavily skewed toward left-wing politics.

As my wife, Inez Stepman, wrote for The Federalist:

If education reform is going to be about more than ticking up the United States’ score on international exams, and if school choice is also our only opportunity to break a left-wing ideological monopoly on public education, we must deliver meaningful, universal education choice to parents now, while Generation X parents are still the majority of those with school-age children.

We must give all parents the opportunity now to choose education options that align with their values, or the values we cherish will continue their slide into extinction.

Historical ignorance and cultural disintegration are only going to become more pronounced until we find a way to expand the net of education that works for the youngest generation.

School choice can no longer be treated as a back-burner issue.

Our future and our freedom depend on it.