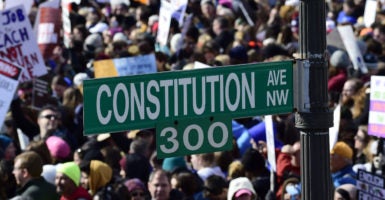 Modern protests demanding more gun control have been likened to the civil rights movement, but civil rights and gun rights often have gone together in American history. (Photo: David Tulis/UPI/Newscom)

It is becoming increasingly fashionable for those who support gun control to compare the post-Parkland, student-driven movement to the civil rights movements of earlier generations.

One writer in The New Yorker wrote of the pro-gun control March for Our Lives protest: “The Parkland students seem to instinctively understand that their fight not only crosses racial and class lines but also exists on a historical continuum, as an extension of the civil-rights movement.”

Another recent article in The Washington Post, headlined “Gun rights are about keeping white men on top,” even tried to connect American gun culture and support for gun rights to racism.

However, the author’s historical argument, whether intentionally or not, actually reveals that it is gun control, not gun rights, that generally has been used for the purposes of white supremacy.

In a recent interview on “The View,” former Secretary of State Condoleezza Rice highlighted the importance of preserving the Second Amendment as an individual right, in some cases the last line of defense in protecting life and liberty.

“Let me tell you why I’m a defender of the Second Amendment,” Rice said on the show. “I was a little girl growing up in Birmingham, Alabama, in the late ‘50s, early ‘60s. There was no way that Bull Connor and the Birmingham police were going to protect you.”

‘The Work of the Abolitionists Is Not Finished’

In the aftermath of the Civil War, a ferocious battle emerged over how to preserve both federalism and the individual rights of citizens in the states.

Gun rights, in some cases, were the only safeguard of liberty and personal safety.

Some of the first states to pass highly restrictive gun control legislation were, in fact, in the Reconstruction-era South. They implemented so-called “black codes” to restrict the rights of former slaves, including the right to bear arms.

One 1866 Alabama law baldly stated that “it shall not be lawful for any freedman, mulatto, or free person of color in this state, to own firearms, or carry about his person a pistol or other deadly weapon.”

The law also made it illegal “to sell, give, or lend firearms or ammunition of any description whatever, to any freedman, free negro, or mulatto.”

Famed abolitionist Frederick Douglass warned about these abuses and said “the work of the abolitionists is not finished” until the Second Amendment and others rights could be protected.

>>> Right Side of History: It’s Time to Listen More to the Words of Frederick Douglass

This provoked a federal response, according to historian Stephen P. Halbrook. Congress passed the Freedmen’s Bureau Act of July 1866, which guaranteed to other men “any of the civil rights or immunities belonging to white persons, including the right to … inherit, purchase, lease, sell, hold, and convey real and personal property, and to have full and equal benefit of all laws and proceedings for the security of person and estate, including the constitutional right of bearing arms.”

President Andrew Johnson vetoed this legislation, but he was overridden by Congress.

These battles over the protection of individual rights culminated in the passage of the 14th Amendment.

The 14th Amendment was designed to prevent states from violating the Bill of Rights, which at the time applied only to the federal government.

However, even after the passage of the 14th Amendment, racial conflict and battles over gun rights continued for generations.

As Rice explained, individual firearm ownership was often the only protection black Americans had under some legal authorities that did little to protect them.

As Ida B. Wells, one of the founders of the NAACP and an early civil rights leader, wrote in 1892, a year in which an extraordinary number of brutal lynchings took place: “The only times an Afro-American who was assaulted got away has been when he had a gun and used it in self-defense.”

“The lesson this teaches and which every Afro-American should ponder well,” Wells continued, “is that a Winchester rifle should have a place of honor in every black home, and it should be used for that protection which the law refuses to give.”

Supreme Court Justice Clarence Thomas noted this history in his concurring opinion in the Chicago v. McDonald case in which the court ruled that Otis McDonald, a black Army veteran, had been deprived of his Second Amendment rights by the city of Chicago.

Thomas wrote about how the infamous Dred Scott decision before the Civil War was meant to strip black Americans of citizenship and “the constitutionally enumerated rights of ‘the full liberty of speech’ and the right ‘to keep and carry arms.’”

After the war, former Confederate states attempted to curtail firearm ownership for black citizens, and mob and militia violence against those citizens often went unchecked by local authorities.

“Without federal enforcement of the inalienable right to keep and bear arms, these militias and mobs were tragically successful in waging a campaign of terror against the very people the 14th Amendment had just made citizens,” Thomas wrote.

Thomas concluded that in the opinion of the Founders and authors of the 14th Amendment, “the right to keep and bear arms was essential to the preservation of liberty.”

As Thomas, Douglass, Rice, and others so clearly articulated, gun rights—not gun control—have been an essential buttress to civil rights.