Right Side of History: It’s Time to Listen More to the Words of Frederick Douglass 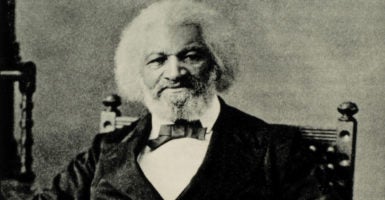 Frederick Douglass, once a slave, became a powerful voice for abolition and upholding the principles of the Declaration of Independence. (Photo: Glasshouse Images/Newscom)

On this week’s episode, hosts Jarrett Stepman, a contributor to The Daily Signal, and Fred Lucas, The Daily Signal’s White House correspondent, discuss the life and legacy of Frederick Douglass, an abolitionist leader who has much to teach modern Americans. Specifically, they discuss the modern debate over his ideas.

With so many debates going on over tearing down statues, maybe it’s time to build some more for Douglass?

Lucas and Stepman also are joined by Bob Parks, co-host of the podcast “Black and Blonde,” to discuss Black History Month and some civil rights heroes who have been overlooked by our schools.

Parks has written about how much of what Americans think about the civil rights movement and our major political parties is wrong. Check out what he has to say in the podcast.