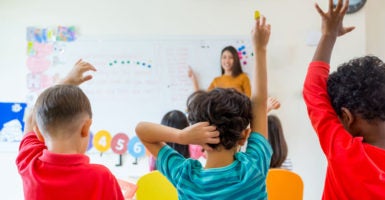 Despite high spending on public education, just two out of 10 eighth-graders in Washington, D.C., public schools can read or do math proficiently. (Photo: Weedezign/Getty Images)

Spending by Washington, D.C., public schools can be difficult to pin down.

Estimates suggest spending is somewhere between $27,000 and $29,000 per child per year, which is roughly double the national average. Assuming $27,000 per student per year, D.C. taxpayers spend about $350,000 on a student from kindergarten through graduation.

Although the District has made considerable progress on the national assessment—often referred to as “the nation’s report card”—over the past two decades, the city’s scores for eighth-graders still fall short of the national average by nearly 20 points—approximately two grade levels of learning.

In eighth-grade math, for example, D.C. students scored 16 points below the national average. In reading, D.C. students were 19 points behind their peers across the country.

That’s right: Just two out of 10 eighth-graders in D.C. public schools can read or do math proficiently.

In addition to lackluster academic outcomes, achievement gaps persist among students. If future performance replicates the past 20 years, the reading achievement gap between children from low-income families trail three grade levels behind their more affluent classmates in math.

“Expert-driven” reforms in the District have failed to produce notable improvements. As the Manhattan Institute’s Max Eden and I note:

Education reformers used to celebrate D.C.’s dramatic decline in school suspensions. Then a Washington Post investigation revealed that it was fake; administrators had merely taken suspensions off the books.

The same reformers used to celebrate D.C.’s sharp increase in high-school graduations. Then an NPR investigation revealed that it, too, was fake; almost half of students who missed more than half the year graduated.

There have, however, been some bright spots in the nation’s capital. Although charter schools scored only eight points higher than noncharter schools in eighth-grade math, charters deserve recognition, having achieved better results at significantly lower cost.

And as education scholar Matthew Ladner noted, the charter schools are at a disadvantage, since transfer students often “experience a temporary academic setback.” Consequently, as charter schools become more established with more stable student bodies, they can “improve with age.”

Overall, the scores on “the nation’s report card” illustrate the District of Columbia’s acute need for improved education performance.

In 2003, the city laid the groundwork for what has been the brightest spot in education in the District—namely, the D.C. Opportunity Scholarship Program.

Beyond other reasons to applaud the school choice option, such as happier parents and safer students, an experimental evaluation commissioned by the Department of Education found that students who used a scholarship graduated at a rate 21 percentage points higher than their peers who were awarded a voucher but did not use it.

D.C. would be well-served by expanding access to the Opportunity Scholarship Program and by formula-funding the program so that parents can rely on it to be there in the future.

Expanding school choice in D.C. will enhance education at all grade levels because parents will be able to match their children with educational options that are the right fit. Instead of having limited options based largely on where they live, parents empowered by choice can find the school that best fits the academic and social needs of their children.

The National Assessment of Educational Progress scores show that D.C. children remain in dire need of access to better education options. Expanding school choice can make that a reality.