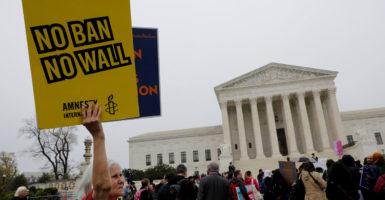 There were plenty of protesters outside the courtroom during the arguments. (Photo: Yuri Gripas/Reuters/Newscom)

Finally, the Supreme Court has heard the arguments on the travel ban case.

On Wednesday, there were plenty of protesters outside the courthouse, a few politicians inside the courthouse (including White House counsel Don McGahn, Sens. Orrin Hatch and Mazie Hirono, and Rep. Bob Goodlatte), and even a celebrity (Lin-Manuel Miranda) as two seasoned litigants took their turn at the podium to argue the long-awaited travel ban case.

And while it is difficult to say with any precision how the case will come out, it seemed that among the justices, a majority (perhaps a bare majority) appeared to be leaning the government’s way.

The case involves the legality of the third iteration of President Donald Trump’s so-called travel ban in which the president has, at least temporarily, suspended the admission of individuals from seven countries—Syria, Iran, Libya, Yemen, Somalia, North Korea, and Venezuela—subject to case-by-case waivers. Two countries—Iraq and Sudan—that had previously been on the list were subsequently dropped, and a third country—Chad—was dropped earlier this month.

The proclamation itself explains the process the administration went through in determining which countries to include on the list. It describes how the secretary of the Department of Homeland Security created a baseline of criteria for countries to meet and measured nearly 200 countries against that baseline.

At the end of this process, 16 countries were found to be deficient, and 31 countries were “at risk.”  This began a period of engagement with each of those governments to address these deficiencies, after which the final list was compiled.

The proclamation also explains the reasons why the remaining countries are still on the list. They share some combination of the following characteristics: some are state sponsors of terrorism, some are safe havens for terrorists, some refuse to cooperate with us, and some lack the institutional capacity to cooperate effectively with us. As Solicitor General Noel Francisco, arguing on behalf of the administration, put it Wednesday:

After a worldwide multi-agency review, the president’s acting Homeland Security secretary recommended that he adopt entry restrictions on countries that failed to provide the minimum baseline of information needed to vet their nationals. The proclamation adopts those recommendations. It omits the vast majority of the world, including the vast majority of the Muslim world, because they met the baseline. It now applies to only seven countries that fall below that baseline or had other problems, and it exerts diplomatic pressure on those countries to provide the needed information and to protect the country until they do.

Francisco also argues that Congress has given the president all the authority he needs to issue this order through Section 1182(f) of the Immigration Act, which provides:

The challengers, represented by former acting Solicitor General Neal Katyal, claim that, in issuing his proclamation, the president exceeded his authority under the Immigration and Nationality Act and that his proclamation violates the Establishment Clause of the Constitution because it was motivated, not for national security reasons, but rather by a desire to exclude Muslims from this country.

In terms of his statutory argument, Katyal argued that Section 1182(f) is not as broad as the government claims. He noted that other provisions of the Immigration and Nationality Act prohibit discrimination on the basis of nationality when it comes to issuing visas, and that Congress chose to offer “carrots” in the form of visa waivers and expedited admission in order to induce countries to cooperate with us, and decided not to impose “sticks” in the form of travel bans in order to induce cooperation. By imposing sticks, Katyal claimed, the president exceeded his authority.

Moreover, he claimed, if Section 1182(f) were as broad as the government claimed, “he could … countermand any of the provisions of the [Immigration and Nationality Act] and turn it into a line item veto”—in other words, it could become the exception that swallows the rule.

He stated that if the Court rules for the government, it would be “giving the president a power no president in 100 years has exercised, an executive proclamation that countermands Congress’ policy judgments.”

Chief Justice John Roberts asked Katyal if the president would have the authority to ban the entry of Syrian nationals if, hypothetically, our intelligence agencies informed the president that they “have 100 percent solid information that on a particular day 20 nationals from Syria are going to enter the United States with chemical and biological weapons” that “could kill tens of thousands of Americans.” Katyal replied that the president could do so exercising “residual authority to keep the country safe,” although he did not define the nature of this authority.

Justice Samuel Alito pressed Katyal on whether the president’s proclamation was really a Muslim ban, noting that while there are roughly 50 majority-Muslim countries, only five are included in the proclamation.

Katyal responded over 90 percent of the individuals living in the seven affected countries are Muslim and that many of the organizations “from every corner of society representing millions and millions of people” that filed briefs supporting the challengers viewed the president’s proclamation as “blatant religious discrimination.”

As to the constitutional challenge, Katyal argued that during the campaign and after his inauguration, Trump has made statements and sent tweets that display an anti-Muslim bias. Even if one were to set aside statements made during the hotly-contested presidential campaign, Katyal argued that Trump had “rekindled” them by more recent statements, and that a “reasonable observer” would believe that the proclamation was premised on anti-Muslim animus, not legitimate national security concerns.

Although Katyal argued that “no president has ever said anything—anything like this. And that’s what makes this different,” Katyal conceded, in response to a question from the chief justice, that if the president disavowed his previous statements and then reissued the same proclamation, the constitutional claim would go away.

Francisco also faced tough questions, most notably from Justices Elena Kagan, Sonia Sotomayor, and Stephen Breyer. Francisco argued that Section 1182(f) does not supplant the other provisions in the Immigration Act, but rather supplements them, thereby giving the president the authority he needs to act on the intelligence he receives on a daily basis in order to keep the nation safe.

He stated that the president had used his authority judiciously and methodically to try to induce cooperation from recalcitrant companies, and pointed out that the policy is working, as evidenced by the fact that three countries that had previously been on the list had been dropped.

Francisco was also presented with an unusual hypothetical from Kagan. She asked what a court could do if some future “out-of-the-box kind of president” who was “a vehement anti-Semite” and who made many denigrating comments about Jews during the campaign and his presidency were to instruct his Cabinet members to issue a proclamation, citing national security, banning the admission of anyone from Israel. She wanted to know whether a court could look behind the stated national rationale to see whether it was a pretext for religious discrimination.

Francisco effectively replied that the officers who received such a directive would be duty-bound to ignore such a blatantly unconstitutional directive or resign, since they too would have taken an oath to uphold the Constitution.

Moreover, he stated, under those circumstances, a court could look behind the stated rationale for the hypothetical directive since it would not be based on a facially legitimate, bona fide reason. However, if the hypothetical president’s Cabinet were to conclude that there was an honest national security risk posed by people from Israel, “the president would be allowed to follow that advice even if in his private heart of hearts he also harbored animus.”

Francisco also directly took on the Muslim ban issue, stating that while the president’s proclamation is decidedly not a Muslim ban, “if it were, it would be the most ineffective Muslim ban that one could possibly imagine since not only does it exclude the vast majority of the Muslim world, it also omits three Muslim-majority countries that were previously covered by past orders, including Iraq, Chad, and Sudan.”

Francisco ended his argument by picking up on the seeming concession that Katyal made that the president could wipe away the taint of any anti-Muslim statements he may have made by disclaiming them.

Francisco stated that, “the president has made crystal clear on Sept. 25th that he had no intention of imposing the Muslim ban. He has made crystal clear that Muslims in this country are great Americans and there are many, many Muslim countries who love this country and he has praised Islam as one of the great [religions] of the world. This proclamation is about what it says it’s about: Foreign policy and national security.”

With that, the chief justice intoned, “the case is submitted” and disappeared behind the curtains. A decision is expected in late June.