‘I Don’t See It’: Trump Doubles Down on Global Warming Skepticism 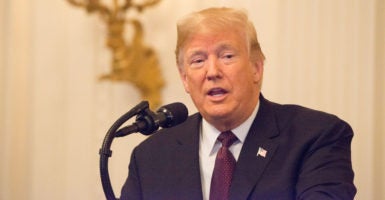 “As to whether or not it’s man-made and whether or not the effects that you’re talking about are there, I don’t see it,” President Donald Trump says about the National Climate Assessment's claims. (Photo: Patsy Lynch/Polaris/Newscom)

President Donald Trump doubled down on disagreements with dire predictions made in the latest U.S. government global warming report.

“One of the problems that a lot of people like myself, we have very high levels of intelligence but we’re not necessarily such believers,” Trump told The Washington Post in an Oval Office interview Tuesday.

“As to whether or not it’s man-made and whether or not the effects that you’re talking about are there, I don’t see it,” Trump said when the Post asked why he was skeptical of claims made in the latest National Climate Assessment released Friday.

The NCA, which is mandated by a 1990 law, issued dire warnings about future global warming’s potential effects on public health, ecosystems, and the economy. The report generated alarming media headlines of impending catastrophe if nothing is done to cut greenhouse gas emissions.

The report claims “climate change is expected to cause growing losses to American infrastructure and property and impede the rate of economic growth over this century.”

However, critics pointed out the report relies heavily on an “exceptionally unlikely” worst-case scenario that projects 4 degrees Celsius of warming by the end of the century.

Trump echoed those criticisms, including disagreeing that global warming would substantially impact the U.S. economy.

“I don’t believe it,” Trump said on Monday when reporters asked about the NCA’s economic predictions.

Trump doubled-down on disagreements with the NCA’s projections, and the president also talked about global pollution problems.

“And it blows over and it sails over. I mean we take thousands of tons of garbage off our beaches all the time that comes over from Asia,” Trump continued. “It just flows right down the Pacific. It flows and we say, ‘Where does this come from?’ And it takes many people, to start off with.”

Trump also pointed to the “global cooling” scare of the 1970s as a reason he’s skeptical of global warming predictions.

“If you go back and if you look at articles, they talk about global freezing,” Trump said. “They talk about at some point, the planet is going to freeze to death, then it’s going to die of heat exhaustion.”

The Post suggested Trump may be referring to an “oft-cited 1975 Newsweek article titled ‘The Cooling World’ or a 1974 Time magazine story titled ‘Another Ice Age?’”

“But researchers who have reviewed this period have found that while such ideas were indeed afoot at the time, there was ‘no scientific consensus in the 1970s’ about a global cooling trend or risk, as there is today about human-caused climate change,” the Post reported.

However, many newspapers, including The New York Times, reported on the global cooling frenzy in the 1970s, not just Newsweek and Time. Scientists wrote to President Richard Nixon to warn of global cooling, and even the CIA prepared a report on the risks of global cooling.

The CIA’s 1974 report warned that continued cooling, as many scientists predicted, would “create worldwide agricultural failures in the 1970s.”