US Disaster Response Needs Deep Reform. Here’s What Can Be Done. 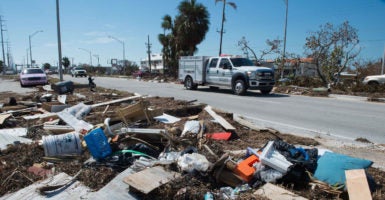 Debris litters the side of the Overseas Highway in the aftermath of Hurricane Irma in Marathon, Florida, Sept. 17, 2017. (Photo: J.T. Blatty/Zuma Press/Newscom)

Those hurricanes also exposed key deficiencies in our nation’s disaster relief apparatus. It is now clearer than ever that improvements must be made to the way we handle disaster relief.

For instance, current law requires the federal government to provide at least 75 percent of disaster relief funding for presidentially designated disasters. This discourages state and local governments from taking the precautionary steps they should take to mitigate the impact of natural disasters. Instead, they rely too heavily on the Federal Emergency Management Agency for a range of natural disasters, making FEMA less prepared for large disasters when they strike.

Another problem stems from the Jones Act, which limits how non-American ships can be used to provide relief to disaster-stricken areas. This makes rebuilding more expensive and more difficult, as was seen in the case of Puerto Rico in the wake of Hurricane Maria.

A third source of problems is the indebted National Flood Insurance Program. This program subsidizes insurance for people who live in flood-prone regions, effectively encouraging more people to settle in those regions and raising the likelihood that people will be displaced by floods. This, in turn, raises costs for taxpayers who have to foot the bill for insurance payouts.

To remedy these and other problems, Congress should shift more disaster relief responsibility from the federal government to the states and local authorities. This would make state and local governments better prepared to handle small disasters, as well as more prepared to face large disasters.

In addition, we can improve short- and long-term disaster relief by more effectively leveraging the National Guard, state militias, and community organizations.

Flood insurance also needs to be revamped. It should be transferred from the public to the private sector, and economic restrictions on shipping and electricity should be removed.

Experts at The Heritage Foundation have compiled a forthcoming report that details the steps government should take to avoid the mistakes of 2017. Heritage will host a forum on the report on April 16, titled “After the Storms: Disaster Response following the Hurricanes of 2017.”