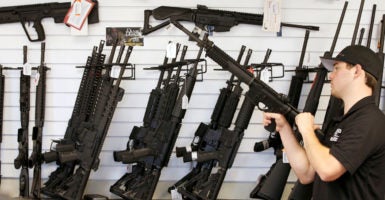 Ryan Martinez clears the chamber of an AR-15 at a gun shop in Provo, Utah, in June 2016. A gun rights group has sued a suburb of Chicago for making it illegal to sell or possess "assault weapons" such as the AR-15. (Photo: George Frey/Reuters/Newscom)

A gun rights organization has filed a lawsuit against the suburban Chicago village of Deerfield for a passed law banning what the measure calls “assault weapons,” such as AR-15 rifles.

“[T]he newly amended ordinance clearly violates the constitutional rights of not only Deerfield residents, but any visitors to the community and those just passing through,” said Guns Save Life, the organization that filed the lawsuit April 5.

The National Rifle Association’s Institute for Legislative Action released a statement in support of Guns Save Life’s legal action.

“Every law-abiding villager of Deerfield has the right to protect themselves, their homes, and their loved ones with the firearm that best suits their needs,” said Chris W. Cox, executive director of the NRA’s lobbying arm. “The National Rifle Association is pleased to assist Guns Save Life in defense of this freedom.”

The possession, manufacture, and sale of assault weapons in Deerfield is not reasonably necessary to protect an individual’s right of self-defense or the preservation or efficiency of a well-regulated militia.

Under the law, the only people allowed to carry firearms considered “assault weapons” are the police and members of the military.

Previous drafts included a self-defense exception, where a person would be innocent of violating the law if the firearm were used to lawfully defend himself or herself. That self-defense clause was removed.

The ordinance defines an assault weapon as “a semiautomatic rifle that has the capacity to accept a large-capacity magazine, detachable or otherwise.” It lists common attachments such as “folding, telescoping, or thumbhole stocks” and muzzle brakes.

A large-capacity magazine is defined as having the capacity to hold more than 10 rounds.

But defining “assault weapon,” as media outlets as varied as The New York Times, Reason, and The Daily Wire have noted, is contentious at best, and politically charged rhetoric aimed at manipulating well-intentioned voters at worst.

“The anti-gun lobby has long depended on public confusion about exactly what an ‘assault weapon’ is,” Reason, a libertarian magazine, wrote.

“The reality is, there’s very little difference between any sporting firearm and a so-called ‘assault weapon,’” Steven C. Howard, a lawyer and firearms expert in Lansing, Michigan, told The New York Times.

An AR-15 was used in the school shooting in Parkland, Florida, in February that left 17 dead, and in other mass shootings. It has been specifically targeted by gun control activists and labeled an “assault weapon.”

Guns Save Life wrote in a formal statement:

The AR-15 stands as America’s favorite rifle for a number of very good reasons. People young and old can effectively utilize the AR platform for competition, recreation and self-defense. Yes, guns protect families. Guns protect children. Banning one of the most effective guns widely in use by America’s nearly 100 million gun owners will only serve to protect criminals, lunatics, and terrorists.

Residents who don’t remove the newly banned weapons from village limits, turn them in to the police, or render them “permanently inoperable” by June 13, the date the ordinance is set to take effect, will face a fine of $250 to $1,000 per day.

The Deerfield ordinance also requests that “state and federal authorities enact statewide or nationwide regulations to prohibit the possession, manufacture, or sale of assault weapons.”

John Boch, executive director of Guns Save Life, released a statement regarding the NRA’s support.

“We are going to fight this ordinance, which clearly violates our members’ constitutional rights, and with the help of the NRA, I believe we can secure a victory for law-abiding gun owners in and around Deerfield,” Boch said.