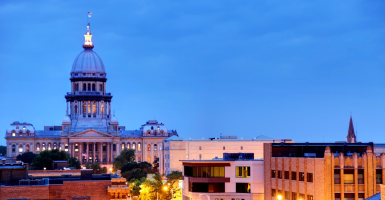 This attempt at government coercion to force violations of conscience is a basic assault on the First Amendment. Springfield, Illinois. (Photo: iStock Photos)

In the latest assault on the First Amendment right of Americans to freely exercise their religious beliefs, the Illinois Legislature has passed a bill that will force doctors to violate their religious convictions about the immorality of abortions. Illinois SB 1564 has passed both houses and is headed to the governor to sign or veto.

Currently, doctors who object to performing abortions because of a sincerely held religious belief or moral conviction are protected under Illinois law from being forced to violate their consciences.

This bill would upset this balance and force objecting doctors to refer or transfer their patients to abortion providers. Thus, this statute would require a physician to facilitate individuals obtaining abortions even if it violates that physician’s religious beliefs and makes him a party to an operation that he considers immoral or a sin.

Not only would this law violate doctors’ religious objections to abortion; it would also defy federal law.

The Coats-Snowe Amendment requires that federally funded state or local governments not discriminate against health providers because they refuse to perform abortions, provide abortion training, or make referrals for training or abortion.

The Church Amendments state that public officials are not authorized to force individuals to perform abortions or “assist” with them because those individuals receive federal health funds.

Similarly, the Weldon Amendment, a part of every federal appropriations bill since 2005, forbids funding any federal, state, or local agency that discriminates against health care providers because they do not “provide, pay for, provide coverage of, or refer for abortions.”

Consequently, this bill could cost Illinois massive federal funding that it receives in the health care arena.

Furthermore, this law likely contravenes the Illinois Religious Freedom Restoration Act, which became effective in 1998. That law prohibits the state government from substantially burdening a person’s exercise of his religious beliefs unless it “is in furtherance of a compelling government interest” and “is the least restrictive means of furthering that compelling governmental interest.”

Illinois has no compelling interest in forcing doctors to violate their religious convictions, particularly given the fact that individual patients who are seeking abortion services can easily find such providers through a wide variety of means including the internet, advertisements, and other referral services.

This legislation that targets pro-life medical professionals is not alone in its hostility toward pro-life providers.

Other pro-abortion legislation still stands, like the California law that requires pregnancy centers to provide disclaimers that include “the phone number of a county social services office where a client could obtain an abortion covered by Medi-Cal.” The courts have denied four separate motions for a preliminary injunction, holding that the law cannot be challenged until it is enforced by the state against the pregnancy centers.

Fortunately, however, pro-life advocates have a history of winning cases against laws that violate First Amendment freedom and conscience rights. In 2014, a federal court invalidated a Maryland law that required only pro-life centers to post signs advising women to consult licensed medical professionals instead of pro-life counselors.

In another 2014 case, a federal court struck down a Texas law that would have required similar negative advertising, including a required sign “declaring that the facility is not licensed to offer ultrasounds—even though there is no such thing as a facility license to perform ultrasounds, and, therefore, centers cannot obtain such licenses.”

This attempt at government coercion to force violations of conscience is a basic assault on the First Amendment and the religious freedom rights on which this country was founded. It erodes a balance that has worked well in Illinois for years and seems intended to drive pro-life doctors out of the OB-GYN profession. Illinois is scorning one of the most fundamental constitutional protections in the Bill of Rights.