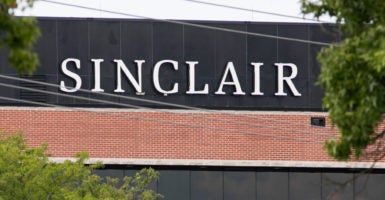 Sinclair Broadcast Group's real sin is that it was ham-fisted about the wrong kind of bias. (Photo: Kris Tripplaar/Sipa USA/Newscom)

Last month, news anchors at Sinclair Broadcast Group’s TV stations were required to read a script critical of “fake stories” and general bias in the major news networks. Because some of the phrasing mirrored President Donald Trump’s overcooked critique of liberal media outlets, the story triggered widespread and overwrought warnings about authoritarianism and the rise of state-run media.

It’s true that Sinclair, the largest owner of U.S. TV stations, would have been better off following the lead of the big outlets: hiring and working with people who subscribe to the same worldview and then simply letting them do their thing. But as long as we have a media market and inhibit government meddling in speech—thank you, Citizens United and Federal Communications Commission Chairman Ajit Pai—the idea that we are powerless to turning away from “propaganda” is nothing but alarmism.

Every Sinclair market has an alternative local news station for viewers, not to mention other sources of information consumers can read and listen to if they desire.

Then again, having read the panicky coverage before watching the Sinclair videos, I was surprised by the innocuousness of the spots. The anchors were plainly reading a scripted public service announcement that claimed there is a “troubling trend of irresponsible, one-sided news stories” at major news outlets and then offering themselves as an alternative.

They then cautioned viewers to avoid the “sharing of biased and false news” on social media, which is, I am often told, a plague on democracy. “But we are human and sometimes our reporting might fall short,” the script goes on to say. “If you believe our coverage is unfair please reach out to us.”

The rhetoric was a less sanctimonious version of CNN’s apples and bananas commercial from a few months ago —another finger wagging aimed at political foes and competitors. One peculiar complaint about the Sinclair spots is that local anchors were being “forced”—a word widely used by those reporting on the incident—to read opinions they do not share. “I felt like a POW recording a message,” one aggrieved newsreader told CNN.

As a writer, I can sympathize with people being asked to say things that undermine their beliefs. In truth, though, no one can force you to say or write anything. If you find the words “fake” and “news” morally and professionally objectionable, quit.

The concept of free will has little part in any of our national conversations these days. You’d think that Russian bots, Facebook posts, and local news anchors all have the preternatural ability to burrow into your brain and make your choices for you.

CNN senior media correspondent Brian Stelter went as far as to claim that viewers were being “force-fed” the Sinclair viewpoint, which would mean that every time an outlet is “leaning forward” or telling us that “Democracy Dies in Darkness” or lecturing us about “fake news,” it, too, is force-feeding consumers their partisan talking points.

It’s clear that the oversized reaction to the Sinclair script is occurring because it flaunted the wrong bias. And considering the often sycophantic treatment the previous administration received from major news outlets, it’s difficult to take those acting appalled very seriously. In fact, those who act most disturbed are in part responsible for the rise of openly partisan journalism. That’s because in many ways, politically motivated news is as much a market reaction as an ideological one.

Take CNN’s full-blown push for gun control over the past few weeks. Is the network any less culpable of the supposed manipulation of democracy when it features a virtually unchallenged—and often fact-challenged—opinion that runs in a loop for a week? CNN wasn’t alone.

Surely, it’s not surprising that many Americans might seek out alternative coverage, especially in conservative areas, where Sinclair is strongest. If the wealthiest legacy networks—the ones the public relies on because they have the most access—keep treating one party with standards and an intensity they don’t apply to the other, then no one should be surprised by a pushback.

Maybe it’s for the best. After all, advocacy journalism isn’t necessarily propaganda. Politically motivated journalists tend to concentrate on specific targets, but their work can be worthwhile and factually sound. It’s likely that the news coverage of the Sinclair affiliates, most of which are run independently, are just as reliable as that of the majors. But in a broader sense, competing biases keep the other side challenged. Meanwhile, let’s continue reading all news with the appropriate skepticism and filters.

And it shouldn’t be forgotten that there are plenty of conscientious journalists. Most media bias, it seems to me, is an organic byproduct of journalists’ worldview, not some conspiracy to mislead the public. But everyone has a bias. There’s nothing wrong with pointing it out. Sinclair’s real sin, though, is that it was ham-fisted about the wrong kind.