The Numbers That Prove How Much the Mainstream Media Hate Trump 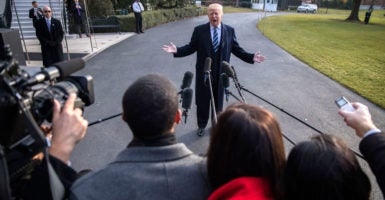 "Our latest numbers show that coverage of Trump on the ABC, CBS and NBC evening newscasts in September, October and November was more than 90 percent negative," the Media Research Center says. (Photo: Shawn Thew/CNP/AdMedia/Newscom)

There may be fake news, but there’s no making up the media’s loathing of President Donald Trump.

The press has been unrelenting toward this president since Day One—and the Media Research Center’s data proves it. Even the 89 percent negativity from his early months almost seem benevolent now, with numbers in the 91-93 percent range (the latter according to Harvard).

“Our latest numbers show that coverage of Trump on the ABC, CBS and NBC evening newscasts in September, October and November was more than 90 percent negative (our methodology counts only explicitly evaluative statements from reporters or non-partisan sources),” the Media Research Center explains. “In September, there were just 31 pro-Trump statements on the Big Three vs. 359 negative. In October, the number of positive statements grew to 41, while the negative statements swelled to 435.”

The hostility is tough to ignore, spilling over into fiery White House press briefings and a line of questioning more combative than most Hill hearings. “Add it all up,” the Media Research Center reports, “and coverage of Trump has been 91 percent negative during the past three months. Our study of news in June, July and August found an identical rate of 91 percent negative, which means TV news is unchanged in its hostility toward the president.”

And the bias isn’t just in conservatives’ heads. Former President (and Democrat) Jimmy Carter knows a little something about dealing with the press as the leader of the free world. Even he agrees: “I think the media have been harder on Trump than any other president certainly that I’ve known about,” he told The New York Times. “I think they feel free to claim that Trump is mentally deranged and everything else without hesitation.”

The reality is that to date the president has systematically gone about fulfilling his campaign promises—and that’s what’s driving people opposed to a conservative, pro-American agenda crazy.