What the WikiLeaks Hack Exposes About Democrat Media Bias 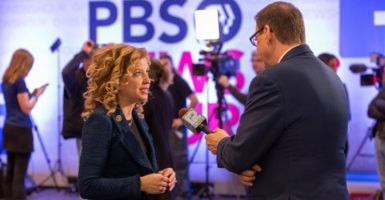 Leaked emails seem to suggest that the Democratic National Committee maintains cozy relationships with mainstream media outlets but takes a more caustic approach with publications it believes to be conservative.

According to these emails, party officials stonewalled and blacklisted the Washington Examiner when editors approached the party in May to gather the names of delegates to the Democratic National Convention for publication in a souvenir edition of its magazine.

“I can send an alert to the state parties not to respond to this inquiry,” DNC Deputy Communications Director Eric Walker wrote in an email of May 10. “Examiner is a right wing rag.”

The episode came on the eve of Democrats’ convention this week in Philadelphia. The organization WikiLeaks released nearly 20,000 hacked emails from seven party officials, revealing the inner workings of the national committee’s communications team.

Washington Examiner Editorial Director Hugo Gurdon told The Daily Signal, “It doesn’t surprise me; they’re a partisan organization explicitly working to elect Democrats. On the other hand, it does seem fairly close-minded—to the point of paranoia—that they’d assume the worst.”

The DNC did not respond to numerous phone calls and emails from The Daily Signal.

Reporter Fred Lucas, while on assignment with Fox News in May, didn’t receive a response when he approached the party committee for comment about claims Donald Trump made about President Bill Clinton’s having extra-marital affairs in the past.

Instead, DNC Communications Director Luis Miranda emailed his team May 13to ask, “Is there a f*** you emoji?”

When Lucas followed up, asking again for a quote, Mark Paustenbach, the national committee’s press secretary, cracked another joke at the journalist’s expense.

“The asshole from Fox emailed us again,” Paustenbach wrote. “I did some research and there’s still no f*** you emoji, unfortunately.”

Lucas joined The Daily Signal in June as a White House correspondent.

“Per agreement … any thoughts appreciated,” Vogel wrote in the subject line.

After the emails were leaked, Vogel admitted that coordinating with the DNC on his May 2 article was “a mistake.”

DNC officials also seemed to coordinate with CNN producer Jason Sheher in another email exchange about what questions to ask communications chief Miranda when he appeared on CNN’s “The Lead with Jake Tapper.”

“Window closing on this. Need to know ASAP if we want to offer Jake Tapper questions to ask us,”  then-DNC media booker Pablo Manriquez wrote to Miranda on April 28.

Tapper defended his staff in a Tumblr post Saturday, writing that it’s “fairly standard” to ask sources what they’d like to discuss during the interview.

“Producers and reporters ask it all the time of Democrats, Republicans, everyone, to make sure we don’t miss out on news-making opportunities,” the anchor wrote.

The DNC also cultivated a close relationship with the viral news site BuzzFeed.

In an April 26 email with the subject line “BuzzFeed and DNC Connection,” BuzzFeed’s communications director, Weesie Vieira, approached Miranda about “putting together some plans around the convention and some other cool stuff.”

The leaked emails led to resignation of DNC Chairwoman Debbie Wasserman Schultz, who represents a Florida district in the House of Representatives. The FBI announced plans Monday to launch a probe into the source of the leak.