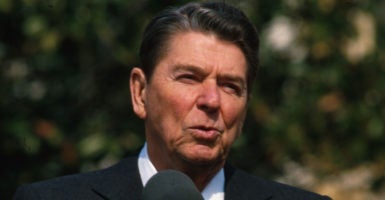 Denitsa Nikolova is a member of the Young Leaders Program at the Heritage Foundation.

Thirty-five years ago, on March 23, 1983, President Ronald Reagan declared, “Isn’t it worth every investment necessary to free the world from the threat of nuclear war? We know it is.”

Thus the president introduced the Strategic Defense Initiative, “a comprehensive, layered ballistic missile defense program,” to the world. Thirty-five years later, the United States, despite significant progress on the program, still has a long way to go to fulfill the president’s vision.

But Reagan’s words still ring true in 2018, just as they did back in 1983. The United States faces great power competition with countries such as Russia and China. These countries have formidable ballistic missile arsenals. So do North Korea and Iran.

More than ever, the government must ensure the security of U.S. citizens and allies.

The Heritage Foundation was proud to sponsor the missile defense study “High Frontier, A New National Strategy,” which provided policy and technical underpinnings for the new program. It called for the development of a layered missile defense program, including advancing space-based interceptor technologies in order to achieve an effective defense against nuclear-tipped ballistic missiles regardless of the origin of their launch.

The new missile defense strategy was prompted by a key vulnerability in the U.S. defense posture. The United States would be able to track adversary missiles, but wouldn’t be able to do anything to stop them. The Strategic Defense Initiative served as a means to protect an American way of life from the fearsome Soviet ballistic missile threat.

The revolutionary aspects of this program are particularly salient when one considers the prevailing nuclear philosophy at the time: In order to prevent a nuclear attack, the United States had to grant the adversary a first strike free ride, absorb an attack, and then retaliate with all its might. This policy is known as mutually assured destruction, or MAD.

Reagan refused to accept this kind of vulnerability. He preferred to operate from a position of strength, and recognized that the United States will never be secure if its enemies are able to use space as an avenue for attack. These principles are as salient today as they were during the Cold War.

While the Strategic Defense Initiative never came to fruition on the scope originally envisioned, it provided a technological and intellectual basis to advance missile defense systems that protect the United States and its allies to this day.

As ballistic missiles spread across the globe, the need to address them increases.

Thirty-five years ago, Reagan set out a vision for the United States not only meant to bolster our defenses in the face of the Soviet threat, but also give the Unites States leverage in deterring nuclear threats from a position of strength.

Thirty-five years later, we are still not secure from this threat. The United States must develop and deploy a layered comprehensive missile defense architecture to fulfill the vision of making nuclear-armed ballistic missiles “impotent and obsolete.”