Senate May Fund Obamacare Subsidies With This Sneaky Move 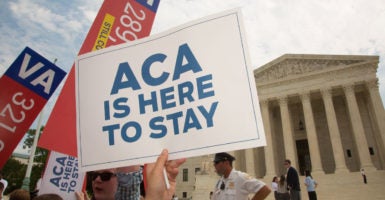 Republicans campaigned for roughly a decade, promising voters they would dismantle former President Barack Obama’s landmark health care legislation; but one of their own senators is trying to keep it alive through the 2018 election cycle.

Leadership has nine days to whip representatives and senators behind an appropriations bill that will keep the government funded through 2018. Congressmen are notorious for using must-pass legislation to add on last-minute features they favor or use the hard deadline to force leadership’s hands on a policy issue.

Sen. Lamar Alexander, R-Tenn., along with Sen. Patty Murray, D-Wash., is using the deadline to sway leadership to include a proposal that would fund politically contentious Obamacare subsidies through 2019. The proposal would provide $10 billion a year for three years for these subsidies.

Additionally, the proposal would give states greater Obamacare waiver flexibility and would broaden consumer eligibility for “copper” plans. Abortion-covering health insurance plans would not receive subsidies under the proposal.

Alexander laid out the potential compromise for his colleagues across the aisle in September during the numerous GOP attempts to repeal Obamacare: Republicans would put forth a bill to continue paying insurance companies Obamacare subsidy payments—cost-sharing reductions—that help cover the cost of deductibles for low-income consumers on the exchanges. In return, Alexander asked Democrats to allow for the expansion of state waivers—commonly known as 1332 waivers—that allow states to innovate their Obamacare implementation as long as they meet the basic Affordable Care Act protections.

Obamacare subsidies have been at the forefront of Republicans’ problems with the health care law dating back to 2014.

The House filed suit against the Obama administration in 2014, under former Speaker John Boehner’s leadership, claiming it was illegally reimbursing marketplace insurers for cost-sharing reductions.

Boehner, along with House leadership, felt cost-sharing reductions required a Congress-approved annual appropriation. The House argued the administration’s actions were unconstitutional because Congress never explicitly appropriated the funds for those payments. The House’s claim had legal standing and allowed the case to move forward on May 12, 2016, U.S. District Court for the District of Columbia Senior Judge Rosemary M. Collyer concluded after nearly two years of deliberation.

Throughout the final year of the Obama administration and President Donald Trump’s first 10 months in office, the respective executive branch heads kicked back the court hearings, leaving insurers on the hook for billions in cost-sharing reductions and no hope of repayment. The Trump administration announced in October it was stopping the payments, essentially ending the debate, unless Congress decided to act.

Republicans are either not thrilled about Alexander’s proposal, calling it a bad idea and one that could hurt the party going into 2018, or they think it could be one way to provide taxpayers some relief from the financial burdens Obamacare imposed.

“It would be a serious mistake,” Sen. Ted Cruz, R-Texas, told The Daily Caller News Foundation in reference to funding Obamacare subsidies. Cruz is one of the loudest advocates for repealing and replacing Obamacare.

Sen. Bill Cassidy, R-La., wasn’t quick to label the Alexander-Murray bill a mechanism for funding Obamacare subsidies and characterized it as a potential solution for saving taxpayers money.

Cassidy and Sen. Lindsey Graham, R-S.C., put forth the final Republican bill in 2017 that would have replaced Obamacare’s Medicaid expansion, cost-sharing reductions, and tax credits for middle-income Americans with block grants.

Along similar lines, Sen. Lisa Murkowski, R-Alaska, an original Alexander-Murray co-sponsor, is a supporter of including Alexander’s proposal in the omnibus bill.

“The senator has long supported passing the Alexander-Murray bill and has consistently said that it would be an important step towards stabilizing the individual market. With that said, the senator would absolutely support having Alexander-Murray included in the omnibus,” Murkowski press secretary Hannah Ray said.

Other GOP senators The Daily Caller News Foundation asked had no idea their colleagues were trying to include Obamacare funding in the omnibus.

“We are not commenting on the numerous issues that remain to be resolved. Negotiations continue with the focus remaining on writing an omnibus appropriations bill that must be approved by the House and Senate by March 23,” a Senate Appropriations Committee staffer told The Daily Caller News Foundation.

Others in the conservative movement think Obamacare subsidies funding is a complete reneging on a decadelong promise and will greatly hurt Republicans in the upcoming November elections.

“This is all happening in the context of having failed on a top campaign promise over multiple elections cycles,” Dan Holler, vice president of conservative advocacy organization Heritage Action for America, told The Daily Caller News Foundation. “What they are proposing with the [cost-sharing reductions] and re-insurance are to prop up the failing status quo. Rather than address the real reasons why the markets are dysfunctional, premiums and deductibles are skyrocketing, and choice is declining, the politically expedient thing to do seems to be throw money at the problem. None of that will address the long-term implications of Obamacare.”

Dropping a near-decadelong campaign promise, even after failing for a full year, isn’t something Republicans should gamble with in an election year, Holler warned.

“There is a real concern that the Republican Congress and the Republican president will abandon repeal and replace. If that is the case, Republicans will own the negative policy outcomes of that and will have a demoralized base heading into a midterm election,” Holler said. “I think it is often forgot by people in D.C. is that the Trump voter includes those who are disillusioned with what Democrats did on health care. These are Republican voters and abandoning them for the sake of the easy political out is poor policy.”

To Alexander’s credit, he has voted to repeal and replace Obamacare and voted for the 2017 Republican tax bill that repealed Obamacare’s individual mandate—a talking point Republicans are now selling as their successful repeal of the Affordable Care Act.

The senator’s home state of Tennessee is representative of some of the greatest problems Obamacare imposed, and 2017 was a banner year for the state. Three insurers pulled out of the state entirely, the state’s co-op failed, and premiums continue to skyrocket annually by double digits.

The point of Alexander’s proposal is to “stabilize” the health care marketplace. Effectively, the logic is providing insurance companies the assurance they will get reimbursed for helping cover the cost of low-income enrollees and that re-insurance money would help keep Obamacare markets solvent.

Consumers are already facing double-digit premiums under Obamacare, and stopping the subsidies for insurance companies, some staffers argue, means the costs insurers are not getting covered from the government will get transferred to the consumer. Reinstating cost-sharing reductions would, the logic goes, make the Obamacare market work effectively. This argument conflicts with the fact premiums were already soaring before Trump cut the subsidies.

Insurance providers signaled they would drop out of the Obamacare market altogether in 2017 when one of their primary concerns was whether or not Trump would continue paying out these subsidies.

Republicans could stand to gain something from the Alexander-Murray bill.

The first victory could be granting states Affordable Care Act flexibility waivers, which would follow the Republican orthodoxy of granting states more control over federal policies. Another could be the inclusion of “copper” plans. These plans can be thought of as “catastrophic plans,” which come with higher out-of-pocket costs but with lower premiums.