House Bill Would Give Military Families the Schooling Options They Deserve 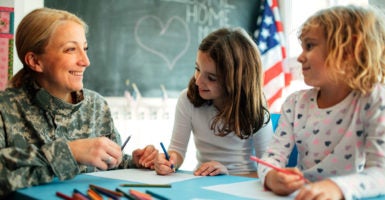 Eighty percent of children from military families attend public schools, but only 34 percent of their parents would choose public schools as their first option. (Photo: vgajic/Getty Images)

The Education Savings Accounts for Military Families Act of 2018 would allow military families to choose education options that are the right fit for their children instead of having to attend the public schools nearest to base.

The proposal would provide education savings accounts to eligible children from military families derived from the funds that would have been sent to a public school on the child’s behalf through the federal Impact Aid program, enabling families to instead direct those dollars to options that work for them.

Under the proposal, education savings accounts could be used to pay for private school tuition, online learning, special education services and therapies, private tutoring, and a host of other education-related products, providers, and services. Families could roll over any unused funds from year to year and even roll them into college savings accounts for when their children complete high school.

Indeed, many military families are unhappy with their present school situations. In a survey conducted by the Military Times, more than a third of readers (who are military personnel) said decisions about whether to remain in the military hinged in large part on dissatisfaction with their children’s education.

Defense is an enumerated power of the federal government, and the Department of Defense has an interest in boosting retention rates by giving military families better educational opportunities.

>>> My Bill to Expand Education Options for Military Families

Better retention rates may not be the only additional benefit of providing education savings accounts to military families. The military could see a spike in recruitment, since prospective service members would know their children could attend the schools that best fit their needs.

The concept of an education savings account option is supported by three-quarters of active military members because they empower parents with the opportunity to find the education that best suits their children. Instead of the government assigning military children to district schools when their parents are assigned to their next duty station, military parents—who know better than anyone else what their kids need—would be able to customize their children’s education.

For example, parents can use education savings accounts for learning beyond the classroom. Students would have access to private tutors, educational therapists, and instructional materials.

Military education savings accounts also modernize the Federal Impact Aid Program to have the same flexibility as the G.I. Bill. Federal Impact Aid supplements the funding of local school districts that have reduced tax revenues because of the enrollment of military and other federally connected children.

Under the Banks proposal, federal Impact Aid would be deposited directly into a military family’s account (if the family chooses) instead of being funneled to school districts. This flexibility is not new: Under the G.I. Bill, service members can attend any university.

Interest groups such as the National Association of Federally Impacted Schools have been skeptical of the proposal, claiming education savings accounts would reduce local districts’ revenue. But Heritage Foundation senior policy analyst Jonathan Butcher says more schooling options for military families would have a negligible impact on school district budgets:

… [D]istricts would see changes to their Impact Aid funding as a total share of the district’s expenditures of no more than 0.10 percent. For heavily impacted districts—districts that have a significant number of students receiving Impact Aid—the figures are similar.

Providing education choice for military families is an idea whose time has come. As Banks explained in The Wall Street Journal, “The men and women who serve our coun­try in uni­form make sac­ri­fices daily, but the ed­u­cation of their chil­dren should not be one of them.”