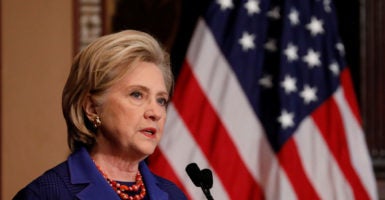 “[Democrats] do not do well with white men, and we don’t do well with married, white women,” Hillary Clinton says. (Photo: Aaron P. Bertnstein/Reuters/Newscom)

And I never considered voting for Hillary Clinton.

In a series of rude, condescending remarks Sunday, Clinton made it clear how little respect she had for those who voted for Donald Trump.

Speaking at the India Today Conclave 2018 in Mumbai, Clinton said: “[Democrats] do not do well with white men, and we don’t do well with married, white women.”

“And part of that is an identification with the Republican Party,” she continued, “and a sort of ongoing pressure to vote the way that your husband, your boss, your son, whoever, believes you should.”

In other words: Women who voted for Trump are idiots who just listen to the alpha males in their lives. Thanks for your confidence in the sisterhood, Hillary.

Seriously, though—why is a supposed feminist “icon” ripping other women apart as unable or unwilling to think for themselves?

Maybe some women voted for Trump because—radical idea here—they agreed with his positions.

Unfortunately, Clinton isn’t the only liberal who thinks women should have voted one way in 2016. Last year, former first lady Michelle Obama remarked, “Any woman who voted against Hillary Clinton voted against their own voice.”

During the 2016 primary—when plenty of “woke” millennial women on the left were supporting Bernie Sanders over Clinton—former Secretary of State Madeleine Albright said, “There’s a special place in hell for women who don’t help each other.”

Characterizing Trump’s message, Clinton said, per The Hill, “You didn’t like black people getting rights, you don’t like women, you know, getting jobs.”

“You don’t want, you know, [sic] see that Indian-American succeeding more than you are,” she continued, “Whatever your problem is, I’m going to solve it.”

And besides being a racist sexist, if you didn’t vote for Clinton, you’re also probably poor:

Why exactly did she bother apologizing for that “deplorables” comment again? Clearly, Clinton was speaking what she really thought there about all the Americans who didn’t vote for her.

And that’s a problem. We can’t have a serious conversation as a country if we villainize all of our opponents. Or dismiss them as brainwashed idiots.

The fact is, I refused to vote for Clinton in part because I think her presidency would have fostered a political climate that allowed the abortion status quo to continue, and where religious liberty might have been further decreased.

But I don’t go around thinking of Clinton’s supporters as being OK with murdering babies or wanting to drive traditional marriage-supporting Christians out of business.

That’s because I listen to them. I realize that support for abortion is often grounded in ignorance about science and concern for vulnerable women. I understand that compassion and care for the LGBT community is what drives their views on other issues, aided and abetted by a mainstream media that rarely does fair reporting on solutions that would allow the LGBT community and traditional marriage believers to coexist peacefully.

And this goes for a host of other issues, too.

Full disclosure: I don’t agree with the left on much of anything. But in conversations, I can talk about what we both agree on—such as the well-being of women—and explain how I think conservative policies can achieve that end they care about.

But I can’t do that if the other person assumes I’m just a brainwashed racist, and thus refuses to listen to me.