US Must Be Wary as It Pursues Engagement With North Korea 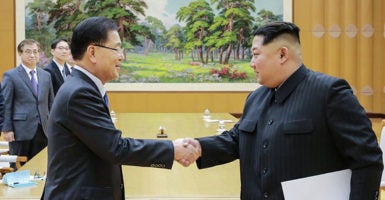 Diplomatic breakthrough or merely a promise to return to square one? It depends on your perspective.

After meeting with North Korean leader Kim Jong Un, a senior member of the South Korean delegation announced Pyongyang had “clearly expressed its commitment to the denuclearization of the Korean Peninsula.” The North also agreed to a moratorium on any further nuclear and missile tests, abandoning its earlier demand for a reciprocal freeze in U.S.-South Korean military exercises.

These were startling developments. For years, the regime has declared that it would never abandon its “treasured sword” of nuclear weapons. In just the last year, it had launched 25 missiles and tested a hydrogen bomb. The apparent breakout of peace was particularly astonishing given that, only two months ago, we seemed to be on the path to an inevitable military clash on the Korean Peninsula.

The sudden, positive script change is welcome. Certainly, the United States should accede to diplomatic meetings with North Korean counterparts.

But don’t break out the bubbly just yet. It’s too early to claim that the other guy blinked. Those who hail the inter-Korean agreement as a breakthrough that averts a U.S. preventive attack seem to forget there is a long history of failed diplomat attempts to resolve the North Korean nuclear crisis.

The first order of business is to confirm that North Korea agreed to what the South Korean delegation claimed it agreed to. There have been previous instances of divergent readouts from Seoul and Pyongyang. At times, they have relied on vaguely worded texts that allowed each side to embrace its own, preferred interpretation.

North Korean media provided a more limited readout of the meeting, omitting any mention of a denuclearization pledge. Days earlier, a North Korean official had declared his country was “compelled to possess a nuclear deterrent in order to protect its sovereignty and the security of its nation from the harsh hostile policy and nuclear threat of the U.S.”

The South Korean version also indicated there were some heavy strings attached to the North’s supposed denuclearization offer. Pyongyang’s offer was conditioned on “the safety of its regime [to] be guaranteed and if military threats against the North were removed.” The regime has long blamed U.S. “hostile policy” as justification for its nuclear arsenal, despite having signed four international agreements promising never to build nuclear weapons and four subsequent accords to give up those weapons.

What constitutes the U.S. hostile policy? Over the years, North Korea has provided a long list of security, diplomatic, and economic demands, including withdrawal of all U.S. troops from South Korea; abrogation of the U.S.-South Korea defense treaty; ending the U.S. extended deterrence guaranty, and removal of all U.S. and U.N. sanctions. As for North Korea’s demand for a security guarantee, the United States has provided many over the years of diplomacy—all to no avail in getting the regime to abandon its nuclear ambitions.

The two Koreas also agreed to convene a Korean summit meeting in late April. Kim and South Korean President Moon Jae-in will meet at Panmunjom within the demilitarized zone. The no-frills neutral site deprives the regime of a propaganda victory: the sight of a third South Korean leader going to Pyongyang to “pay homage” to North Korea’s supreme leader.

Pre-summit negotiations should focus on determining an agenda that addresses U.S. and allied security concerns and clearly delineates denuclearization as the end goal. South Korean engagement efforts by Moon’s progressive predecessors were largely one-sided concessions to the North without sufficient demands for conditionality, reciprocity, and transparency.

Past negotiations with North Korea foundered when the South, overeager to achieve an agreement, paid insufficient attention to the details. Unlike extensively detailed arms control treaties with the Soviet Union, negotiations with North Korea led to short, vaguely worded agreements that allowed both sides to claim differing interpretations as to what was agreed upon. All previous Korean agreements were also marred by insufficient verification measures.

Numerous U.N. resolutions already require North Korea to cease its nuclear and missile tests and to abandon its nuclear and missile programs in a complete, verifiable, irreversible manner. The United States and its allies should not dilute that requirement. Nor should it reduce the pressure that pushed North Korea to reconsider its defiance of the international community. Sanctions must be maintained and strengthened as long as Pyongyang continues the behavior that triggered them.

The Trump administration should move quickly to fill key diplomatic vacancies, particularly the ambassador post in Seoul and the State Department special representative for North Korea policy. Given Pyongyang’s new interest in engagement, the administration should consider appointing a senior envoy to coordinate U.S. policy on North Korea and serve as high-level interlocutor.

I’ve equated the sudden shift from impending military clash to unexpected diplomatic engagement as a Korean Game of Thrones. But does this week’s development portend a peaceful resolution or the setup to a Red Wedding?

The U.S. should be willing to go down the engagement path once again. But it must keep its eyes open, its shield up, and its sword sharp. The season of reduced tensions and engagement is at hand, but winter may be coming back.