Homeland Security Oversight Is a Mess. Here’s What Should Change. 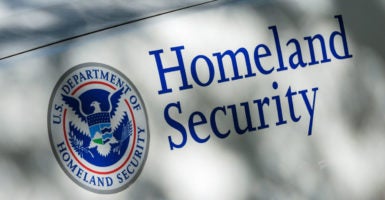 Since its founding in 2002, the Department of Homeland Security has never been reauthorized, which has allowed various problems to fester.

Last July, the House passed a reauthorization bill that addressed many of the problems. But more can be done to address the inefficient and complex congressional oversight structure that continues to plague the department.

On Wednesday, the Senate Homeland Security and Governmental Affairs Committee passed the Senate’s version of the reauthorization for Homeland Security, which is good news considering the department is desperately in need of reform.

Specifically, the Senate bill proposes a commission to fix the department’s impractical congressional oversight structure. The Department of Homeland Security was created after 9/11 to bring several national security-related agencies—including the Coast Guard, Federal Emergency Management Agency, the Secret Service, and Immigration and Customs Enforcement—under one roof.

Each of these agencies already were subject to oversight by numerous congressional committees, and, given the urgency of getting the department created, those jurisdictions were left in place.

As a result, more than 100 congressional committees, subcommittees, and caucuses claim oversight rights on Homeland Security, which breeds gross inefficiency.

It’s not only that Homeland Security officials could find themselves presenting the same or slightly different information to multiple congressional committees, it’s that those committees can have contradictory needs and priorities for the department.

The 9/11 Commission suggested giving primary jurisdiction for oversight of Homeland Security to only four bodies—an authorizing committee and an appropriating subcommittee in both the House and the Senate. This would structure Homeland Security oversight in the same manner as other departments, such as Justice and Defense.

Outside of Capitol Hill, there is wide, bipartisan agreement that this is a commonsense change well worth making. The commission established by the Senate bill would propose much-needed changes, but Congress would still need to adopt those changes.

To improve the efficiency and effectiveness of the department, Congress needs to reshape Homeland Security’s oversight structure. The status quo is not working and, as the 9/11 Commission noted, “Congress’s failure to reform itself makes the country less safe.”

Congress should prioritize our nation’s security over the desire of various committees to retain oversight power over Homeland Security. This change is long overdue.