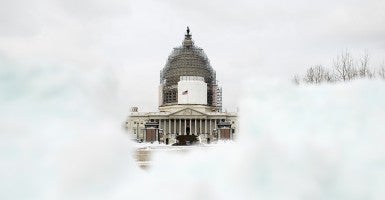 Days after President Obama delivered his Nov. 20 speech outlining executive actions on immigration, conservatives pressed Republican leaders to wage a fight while the issue was fresh on the minds of voters.

“From the onset, we really believed it was a poor strategy,” says @RepMattSalmon

Republicans had just made historic electoral gains in the House and taken control of the Senate. Meanwhile, seven Senate Democrats were on the record voicing concerns about Obama’s unilateral move.

But when lawmakers had the opportunity in early December to stymie Obama’s moves by withholding funding, they punted. Congress approved the so-called “CRomnibus,” which funded the federal government for the full fiscal year and the Department of Homeland Security through Feb. 27.

“Come January, we’ll have a Republican House and a Republican Senate—and we’ll be in the stronger position to take actions,” House Speaker John Boehner, R-Ohio, said at a Dec. 4 press conference.

The strategy, proposed by Rep. Tom Price, R-Ga., and embraced by Republican leadership, ultimately failed to undo Obama’s actions. This week, a majority of Republicans in the House (167 of 245) and Senate (31 of 54) opposed the Homeland Security bill, forcing GOP leaders to rely on Democrats to pass the measure.

“Unfortunately, leadership’s plan was never to win this fight,” said Sen. Ted Cruz. “Since December, the outcome has been baked in the cake. It was abundantly clear to anyone watching that leadership in both houses intended to capitulate on the fight against amnesty. It was a strategy doomed to failure.”

The Texas Republican was among the most vocal critics of Obama’s immigration actions, invoking Cicero’s warning to the Romans as he railed against the president’s “lawlessness.”

Even though a court case could still derail Obama’s actions, conservatives voiced disappointment with the outcome in Congress. Yet not everyone walked away surprised by how it played out.

The Daily Signal interviewed several of those lawmakers to better understand how events transpired after Obama’s Nov. 20 announcement through Tuesday’s vote.

Just weeks after Republicans swept the midterm elections, Obama outlined executive actions that he would take without congressional approval to defer deportations for up to 5 million illegal immigrants.

“We’re considering a variety of options,” McConnell said on Nov. 20. “But make no mistake. When the newly elected representatives of the people take their seats, they will act.”

Within a matter of weeks, however, Republicans found themselves divided over the strategy.

Republican leaders settled on a plan known as the “CRomnibus” to fund the federal government. As part of the package, the Department of Homeland Security would be funded through Feb. 27, giving Republicans an opportunity to fight Obama’s actions when they controlled both houses of Congress. Conservatives weren’t united around a particular strategy but many of them had alternatives to the plan leadership ultimately pursued. Some wanted to have the fight in December, risking a government shutdown before Christmas, while others suggested a short-term funding plan for the whole government until early 2015.

Many conservatives didn’t like attaching the immigration fight to Homeland Security funding. Some, including Labrador, even took the rare step of opposing leadership on a Dec. 11 procedural vote that nearly failed when 16 Republicans broke ranks. Rep. Marlin Stutzman, R-Ind., later accused GOP leaders of misleading him into switching his decisive vote.

Had conservatives blocked the spending bill on that vote, it would have forced leadership to revise the strategy.

“From the onset, we really believed it was a poor strategy,” said Rep. Matt Salmon, R-Ariz.

Heritage Action for America, a sister organization of The Heritage Foundation, expressed similar concerns at the time.

“The tactic in Washington, D.C., is what they call defer and delay,” says @RepMarkMeadows.

“Some have suggested the short-term funding for DHS will provide conservatives another opportunity to block President Obama’s actions in early 2015, but that approach is problematic,” the organization noted in a key vote alert.

Among the reasons: Republicans would be approving, at least temporarily, Obama’s executive actions, and waiting 100 days until Feb. 27 would allow the administration to get the program up and running.

“The tactic in Washington, D.C., is what they call defer and delay,” Rep. Mark Meadows, R-N.C., told The Daily Signal. “If they can defer the decision and delay the decision, then the passion and outcry of American people lessens. They’re able to capitulate and pass something that is certainly not as representative of the people’s will as it might be when the action initially takes place.”

Several of the lawmakers who spoke to The Daily Signal voiced concerns about leadership’s strategy.

“We’ve been through this time after time,” said Rep. John Fleming, R-La. “We’ve heard the same promises and we’ve seen the same poor results. We’ve come to understand how it works. There are promises to fight but yet the process is created in a way that eventually there’s going to be a cave.” Fleming said conservatives’ frustration led to the creation of the House Freedom Caucus, a group of 30-some members who have vowed to be united on these fights in the future.

This week’s vote was the group’s first test and members of the caucus were optimistic about their impact, even if the outcome wasn’t ideal.

Salmon noted that Republican leadership urged members to vote in favor of the “clean” Homeland Security funding bill, which included no language defunding Obama’s actions. A majority of Republicans ultimately voted against the measure Tuesday.

“When 167 Republicans ignore leadership’s recommendations, that’s got to be a big wake-up call,” Salmon told The Daily Signal. “They voted with us, not with them.”

“Ultimately, we’re going to have to find a strategy to put more pressure on Senate Democrats in the future,” says @michael_steel

The Freedom Caucus also put forward several ideas for GOP leaders to consider during the standoff. None of their ideas were embraced, prompting Labrador to rethink the group’s approach next time.

“We need to get our message out, not just to the media but also to the other conference members,” Labrador said. “Every time I told other Republicans about our offers, they were stunned our leadership didn’t accept them. And I’m talking across the spectrum—conservatives and moderates.”

A spokesman for Boehner said the speaker welcomed ideas from members.

“Our strategy was developed working with and listening to our members,” said Boehner spokesman Michael Steel. “This fight was won in the House. Ultimately, we’re going to have to find a strategy to put more pressure on Senate Democrats in the future.”

Huelskamp, who has been stripped of committee assignments for voting against leadership, was one of a dozen members attacked in ads from the pro-leadership American Action Network. A spokesman for the group, which supported the Homeland Security funding bill, did not respond to The Daily Signal’s request for comment.

Meadows, the North Carolina conservative, was also targeted by the group’s ads.

“The American people have had enough,” Meadows said. “I’ve had dozens of emails since the vote saying, ‘Why should I vote for another Republican when the results are the same?’ That’s troubling for me.”

“The American people are not going to continue to be patient,” he said. “If we have any chance at all of maintaining the Senate and winning the White House, we have got to prove that we are the real deal.”

Despite the frustration, Boehner and McConnell’s jobs appear safe, even if members are displeased with their handling of the immigration fight. “The speaker said, I’m going to fight tooth and nail. What that means to me is no stone unturned. Every option on the table. And that’s certainly not what happened,” Salmon said.

Huelskamp said Republicans managed to give away the only leverage they had to stymie Obama. With no more spending fights until this fall, he fears the president will be emboldened to take unilateral action on other issues.

Meadows suggested the White House is already signaling its next move.

“It doesn’t stop here with amnesty. The same day we’re debating amnesty, the White House is talking about taking action to increase taxes,” Meadows said. “It’s just a total breakdown of a wall of separation of powers of the executive branch and legislative branch.”

While the fight over Obama’s immigration actions now plays out in court, Huelskamp predicted the party’s establishment will ultimately prevail this time.

“The biggest donors to the Republican establishment, they all are happy today. They got their amnesty,” Huelskamp said. “They just hope the issue goes away and somehow they think conservatives are still going to show up and vote for whoever the presidential nominee is.”

This story was updated to include additional details about the December debate over the GOP’s strategy.