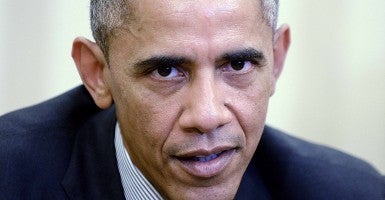 President Barack Obama makes remarks during a meeting with a group of illegal immigrants in the Oval Office Feb. 4. (Photo: Olivier Douliery/Newscom)

A group of conservative members of Congress are urging Senate Republicans to stand their ground in the high-stakes standoff with Democrats over funding the Department of Homeland Security and rolling back President Obama’s executive actions on immigration.

“I would strongly encourage … Senate Majority Leader Mitch McConnell hold the line on this,” said Rep. Mark Walker, R-N.C., yesterday at The Daily Signal’s Conversations With Conservatives event on Capitol Hill. “We need pushback. The House has done its job.”

The conservatives’ message was largely aimed at the Kentucky Republican, who told reporters this week his chamber is “stuck,” putting the onus on the House of Representatives to come up with a solution. The House passed the Homeland Security funding bill on Jan. 14.

“What Mitch McConnell needs to do is tell the Senate this week that they’re going to stay next week,” said Rep. Raul Labrador, R-Idaho. “Forget about recess … they’re going to do everything in their power to make sure that this gets to the floor.”

The GOP-controlled Senate has tried three times to consider the Homeland Security funding bill, but is unable to break a Democrat-led filibuster. Thus far, Senate Republicans have secured 53 votes, shy of the 60 needed to debate and consider amendments.

Several Democrats, including House Minority Leader Nancy Pelosi, D-Calif., have made it clear that the upper chamber will only consider a Homeland Security funding bill free of language related to Obama’s immigration executive actions.

By refusing to introduce “clean” legislation without language related to Obama’s actions, Democrats accuse Republicans of playing politics with the Department of Homeland Security.

Republicans, however, maintain that Democrats are responsible for obstructing the bill by refusing to even debate the matter. Senate Republicans have promised to consider amendments from their Democratic colleagues if they’ll stop filibustering the bill.

GOP members of the House and Senate are united: Senate Democrats need to stop their filibuster of #DHS funding. pic.twitter.com/JEWZoT045a

“If we’re going to allow seven Democratic senators to decide what the agenda is of the House Republican conference, of the Senate Republican majority, then we might as well just give them the chairmanships, give them the leadership of the Senate, and allow them to decide what the focus and agenda for the American people is going to be for the next two years,” Labrador said.

Alternative ideas for overcoming the Democrat filibuster include blocking the confirmation of Loretta Lunch as attorney general, partially defunding the Department of Homeland Security, or invoking the so-called “nuclear option,” which would change Senate rules so that spending bills need only a simple majority to advance instead of 60 votes.

“I’m just not that scared of sticking to principles and fulfilling campaign promises that we made back home, irrespective of what leadership tells us to do here,” said Rep. Curt Clawson, R-Fla. “My friends and I will take that battle on.”

According to a new Rasmussen poll, a majority of likely U.S. voters are against Obama’s executive order that grants semi-legal status to millions of immigrants residing in the country illegally.

The national survey found that 51 percent of voters oppose the president’s executive order, while 37 percent support it. Twelve percent declined to answer.

“We’ve got the largest majority now, and we reflect the will of the people on this,” said Rep. Jeff Duncan, R-S.C. “This is about the Constitution and that separate of power.”

Congress has until Feb. 27 to reach an agreement before the Department of Homeland Security funding expires.