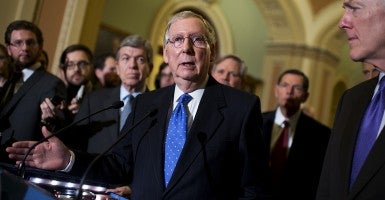 In a move that surprised some Republicans in Congress, Senate Majority Leader Mitch McConnell told reporters his chamber is “stuck” in its standoff with Democrats over funding the Department of Homeland Security.

He put the onus on the House of Representatives to come up with a solution.

“I think it’s clearly stuck in the Senate, we can’t get on it, we can’t offer amendments to it,” McConnell, R-Ky., told reporters today. “And the next step is obviously up to the House.”

The GOP-controlled Senate tried three times last week to consider the Department of Homeland Security funding bill, but was stonewalled as Senate Democrats filibustered a motion to debate the legislation because of provisions that would block President Obama’s executive actions on immigration.

The bill, which would undo Obama’s recent executive actions along with an earlier program that allowed immigrants who entered the country illegally as children to stay, passed 236-191 in the House in January.

Pelosi to R's on DHS $ bill: Their extreme anti-immigrant riders are dead and cannot pass the Senate.

Republicans in both chambers of Congress pushed back on McConnell’s statement today, arguing that it’s up to the Senate to find the Democratic support needed to pass the House bill.

Brian Phillips, a spokesman for Sen. Mike Lee, R-Utah, told The Daily Signal the onus is on the Senate to “find a plan B.”

“The House has acted to fund [the Department of Homeland Security],” Phillips said, adding:

It’s up to the Senate to now act, but first Senate Democrats have to stop blocking consideration of the bill. If they don’t like certain provisions, they will have an opportunity to amend it. But forcing a DHS shutdown is not a sustainable position for Democrats. They are the ones who need to find a Plan B. “Their obstructionist tactics do a disservice to the American voters who sent us to Washington to lead,” Flores said in a statement to press. “Congressional Republicans are unified in their desire to move forward to provide homeland security in a responsible manner.”

Michael Steel, a spokesman for House Speaker John Boehner, R-Ohio, said there is “little point” in taking the issue up in the House until Democrats explain what would break their filibuster. He said: