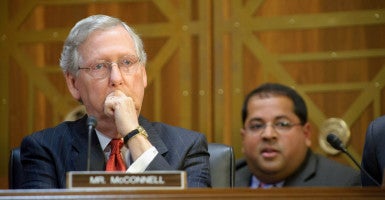 As many Senate Republicans continue to oppose holding hearings for President Barack Obama’s nominee to the Supreme Court, Senate Majority Leader Mitch McConnell is urging Senate Banking Committee Chairman Richard Shelby to move the White House’s nomination to the Export-Import Bank’s board of directors, according to a GOP Senate staffer.

The staffer told The Daily Signal that McConnell, R-Ky., has been pressuring Shelby, R-Ala., to move on nominee Mark McWatters, nominated to the Export-Import Bank’s board of directors in January.

McConnell’s office did not respond to requests for comment.

Sending McWatters’ nomination to the full Senate for consideration—where he would likely be confirmed—would bring Ex-Im one step closer to resuming business as usual.

The controversial agency was reauthorized late last year following a nearly five-month lapse in its charter. Since its reauthorization, Ex-Im has been crippled in its ability to extend financing to some of its largest beneficiaries, including Boeing and General Electric, because of empty seats on its board of directors.

Ex-Im’s five-member board must approve all transactions that exceed $10 million and needs a quorum—three active members—to do so. Currently, just two seats on the panel are filled, and the Banking Committee sat on Obama’s nomination of Patricia Loui-Schmicker to a second term on the board for 10 months before the president withdrew her nomination in January.

The White House sent Shelby’s committee a second nominee, McWatters, a Republican, at the beginning of the year. Like Loui-Schmicker, though, his nomination has not moved through the committee, either.

Despite McConnell’s urging for Shelby to move on nominations to the board, the bank’s inability to approve transactions of more than $10 million doesn’t impact its financing for small businesses. The bank’s supporters in Congress have long stressed that Ex-Im is crucial for small businesses, specifically, as it helps them expand into global markets.

It’s large companies, like Boeing, that benefit from Ex-Im financing exceeding $10 million, and because three positions on the bank’s board remain vacant, those companies haven’t had such financing for deals with companies abroad approved.

If Shelby holds strong, McConnell could move to bring the nominees directly to the Senate floor, bypassing the chairman and his committee.

Though it would be difficult for the majority leader to make such a move without taking heat and sending a bad message to other committee chairmen, the GOP Senate staffer said the majority leader could enlist the help of his Democratic colleagues to do so.

However, the staffer warned that setting such a precedent could be dangerous for the majority leader, particularly as a number of nominations—including that of Supreme Court nominee Merrick Garland—are currently held up in GOP-led committees.

Speaking to attendees Thursday, Dennis Muilenburg urged Shelby to move forward with nominees to Ex-Im’s board. Muilenburg warned that without financing from the government agency, airlines abroad may not be able to accept the delivery of planes from Boeing, which puts its international business at risk.

Though previously reauthorized with little fanfare, conservatives began mounting efforts to end the 81-year-old agency and warned Ex-Im is an engine of cronyism and corporate welfare.

Conservatives lawmakers were successful in allowing the bank’s charter to expire on June 30. However, both Republicans and Democrats in the House and Senate brought Ex-Im back to life late last year, and Obama signed the bank’s reauthorization into law in December.