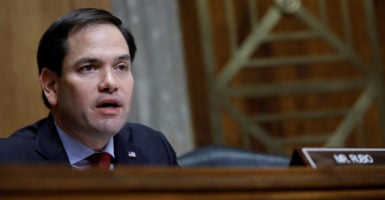 Sen. Marco Rubio, R-Fla., rolled out a series of gun proposals Thursday, one day after joining a group of lawmakers who met with President Donald Trump at the White House.

“While there are sharp differences on restrictions to the Second Amendment, there is widespread agreement that we must act now to prevent another tragedy like Parkland from happening anywhere else ever again,” Rubio said Thursday on the Senate floor, referring to the shooting that occurred in his home state where a gunman killed 17 at Marjory Stoneman Douglas High School on Feb. 14.

Still, Rubio added that even if police, teachers, or family members identify a threat, they have limited options to prevent that person from buying a gun.

“I intend to present a new law that will lead to the creation of gun violence restraining orders that will give law enforcement and close family members the option of obtaining a court order to prevent gun sales or remove guns from individuals who pose a threat and provide due process protections,” Rubio said.

Rubio said he is joining Sen. Orrin Hatch, R-Utah, to introduce the “Stop School Violence Act” that, if passed, would strengthen school security, and create school assessment and crisis intervention teams to work with law enforcement agencies and school personnel to identify students who could pose a threat of violence.

“Our schools are woefully unprepared to prevent an attack before it occurs,” Rubio said. “Furthermore, during my visit to the site of the attack and my follow-up meeting with teachers at the school, I learned of various changes to school facilities and practices which could have stopped this attack or improved the response.”

He further said he backs strengthening background checks to require all federal agencies and incentivize every state to fully report all relevant information to the national background check database.

He is also backing a bipartisan “Lie and Try” bill that requires the FBI to inform states when a prohibited person tries to buy a firearm and fails a background check, so the state can investigate and prosecute the offender, and go after “straw purchases,” which is when an individual who can pass a background check buys a firearm to pass it to someone who cannot pass the background check.