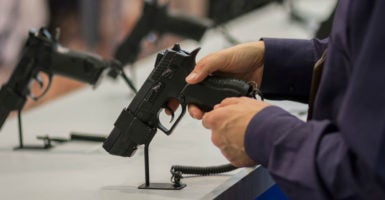 After record-breaking sales during the Obama years, gun sales have finally slowed since the 2016 election. (Photo: iStock Photos)

In past years, the SHOT Show—the Shooting, Hunting, and Outdoor Trade Show; organized annually by the National Shooting Sports Foundation, held this year in Las Vegas—has been marked by delight at the booming firearms market, clouded by concerns about impending executive actions by now-former President Barack Obama.

This year, SHOT was the exact opposite: hopes for regulatory relief from President Donald Trump, tempered with regret at the end of—or at least a pause in—the remarkable sales run of the past eight years.

For say what you will about Obama—and SHOT Show attendees often do—he drove firearms sales better than anyone except, maybe, Bill and Hillary Clinton.

Obama’s record on this score is remarkable.

Firearms transactions in the U.S. are preceded by background checks through the National Instant Criminal Background Check System (NICS)—and in each of the 17 months prior to the election in November, the volume of NICS checks was higher than in the corresponding month of the previous year.

But now the party, if not over, is emptying out. Preliminary figures suggest a decline of 20 percent in NICS checks since the election, and there are similar patterns in excise tax payments and hunting licenses.

Even in the fascinating realm of National Firearms Act weapons—machine guns, certain shotguns, and silencers—which has seen price increases of up to 10,000 percent over the past 20 years, much of the market appears to have stabilized.

The firearms market is as complex as firearms themselves. But no one I spoke to at SHOT doubted that Obama was one of the major causes of the market surge since 2008. He promoted panic buying, encouraged aspiring and worried collectors, and pushed hesitating purchasers into action.

The irony is that, for all his supposed desire to get guns off the streets, Obama ended his presidency having put a great many more on them.

Obama was more successfully vexatious on the regulatory front. You can’t take a serious interest in things like the Arms Trade Treaty without realizing that, no matter what liberals think, the firearms industry (manufacturers and retailers alike) is among the most highly regulated in the United States.

There is a Bureau of Alcohol, Tobacco, Firearms and Explosives form for everything, and if you do not have an organized mind, you are likely to get into trouble very quickly.

The industry has adapted to this, and though firearms attorneys regale each other with stories of bad clients (and ATF inspections seemingly driven by pique, not policy), what it wants isn’t a looser rope for people who can’t play by any rules. Rather, it wants consistent rules that don’t unnecessarily hinder lawful business.

One problem with Obama was that, for all his airy protestations of respect for the Second Amendment, he clearly despised both the firearms industry and anyone who bought one of their products.

But another—and related—problem was that his administration did little to help the industry, and a good deal to get in its way.

So much of the talk at SHOT this year was about regulatory relief. National Firearms Act collectors hope for an amnesty to get tens—or perhaps hundreds—of thousands of war trophy machine guns out of America’s attics (and the estates of the veterans who collected them) and lawfully registered.

Virtually everyone hopes Congress will pass the Hearing Protection Act, which would remove silencers from the National Firearms Act. In Europe, silencers (more accurately called suppressors) can be bought off the shelf, whereas in the U.S., by accident of history, they are tightly controlled.

With more than half the states now allowing the use of silencers in hunting, and as shooting ranges don’t want to annoy their neighbors, the act commands wide support.

Then there is the matter of firearms imports and exports. The U.S. is a bigger importer than exporter, and with the U.S. market no longer skyrocketing upward, some manufacturers are likely to cut costs by importing more parts and components.

But the Obama administration seemed to specialize in causing trouble for importers and exporters alike.

From refusing to finish export control reform for firearms (where the National Shooting Sports Foundation rightly continues to lead the charge), to banning the re-import of some U.S.-origin firearms, to high fees imposed by the State Department, to recent decisions on the registration of manufacturers and the treatment of parts and components for export, the Obama White House did what it could, where it could, to keep old regulatory barriers in place and to raise new ones—to the detriment of people who are only interested in following the law.

Many at SHOT—indeed, almost everyone—thus hope that the Trump administration will improve the regulatory environment for firearms.

Of course, right now, everyone is free to dream, and lots of industries have similar hopes. But if the administration is looking for a roadmap on firearms, it can’t do much better than an article by Teresa Ficaretta and Johanna Reeves of Reeves & Dola, “10 Things Trump Can Do for the Firearms Industry,” just published in Small Arms Defense Journal.

To their excellent list, I would add just two items.

First, Trump should “unsign” the Arms Trade Treaty as soon as possible. From the point of view of SHOT, the risk of this treaty is that it will become a reason (or an excuse) for imposing more of those vexatious regulations in which the Obama administration specialized.

Of course, there is much more to the Arms Trade Treaty than that, but that is enough.

Second, he should do the same to CIFTA, a treaty on the illicit manufacturing of firearms that, though not well known, is even worse—and much more onerous—than the Arms Trade Treaty.

Both treaties will achieve nothing of use. Both were also favorites of Obama—and liberals will not forget them.

Their danger rests not in any possibility of gun confiscation, which thanks to the sales Obama helped to provoke has been rendered even more impossible than ever. Their danger rests in the encouragement both treaties offer to the regulator.

That’s a much more subtle danger, but it’s one of which firearms importers, exporters, manufacturers, and owners, as the Obama years have shown, have good cause to be wary.