Where Kosovo Stands After 10 Years of Being a Republic 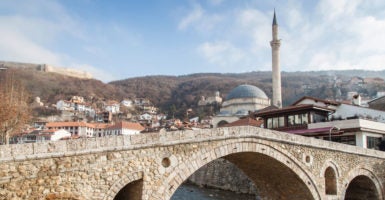 The Republic of Kosovo, a young democracy in the Balkans, celebrated the 10th anniversary of its independence on Feb. 17.

Kosovo’s president, Hashim Thaci, in his speech commemorating the occasion, expressed pride in his country’s notable accomplishments, emphasizing that “the trends are positive, and that should motivate us all to move forward.”

The U.S.-Kosovar relationship has been constructive and forward-looking from the birth of Kosovo. The United States was one of the first countries to recognize Kosovo’s independence and has championed recognition by other countries.

To date, 114 others have joined the U.S. in acknowledging Kosovo’s independent status.

During a meeting with Thaci at the White House in September, Vice President Mike Pence unambiguously reconfirmed U.S. support “for a sovereign, democratic, and prosperous Kosovo.”

Echoing that commitment, U.S. Ambassador to the United Nations Nikki Haley congratulated Kosovo on behalf of President Donald Trump on the country’s independence anniversary, noting that “you have made amazing strides in building a democracy.”

“So, we look forward to the next 10 years, working with you and helping you succeed in every way possible,” Haley said.

Since gaining its independence in 2008, Kosovo has recorded positive economic growth rates every year. Over the past three years, real gross domestic product growth has averaged about 4 percent, a relatively strong performance compared with other Western Balkan countries.

As summed up by International Monetary Fund Deputy Managing Director Tao Zhang, “Kosovo has been a successful example of a post-conflict country able to develop its economy by implementing important reforms.”

In addition, Kosovo’s evolving bilateral economic relationship with the U.S. should reinforce the country’s ongoing economic transition to a market economy.

A major joint energy project is getting under way, and Kosovo has been designated as a new Millennium Challenge Corp. threshold program partner. The program aims to support Kosovo’s efforts to lower energy costs and to improve transparency and accountability.

According to The Heritage Foundation’s annual Index of Economic Freedom, Kosovo’s progress toward an open, market-based economy continues, although lingering institutional shortcomings related to the rule of law continue to put downward pressure on its overall competitiveness.

However, the landlocked country’s economy has measurably outperformed its neighbors. If Kosovo can maintain its current momentum in pursuit of greater economic freedom, the next 10 years should be even brighter than the decade now being celebrated.