How to Protect Free Speech on Campus? Override the Heckler’s Veto. 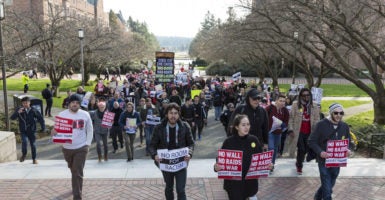 Students protest against the "Patriot Prayer" event, a gathering organized by conservatives at the University of Washington in Seattle, Feb. 10, 2018. (Photo: Paul Christian Gordon/Zuma Press/Newscom)

The irony and hypocrisy are obviously lost on self-styled “anti-fascists” who loudly—and, more often than not, violently—shut down, in fascist fashion, the free speech of others on college campuses.

Or maybe they are in fact aware of the hypocrisy and just don’t care about the bad PR optics, because they are so self-righteously convinced of the correctness of their cause.

Either way, Mikaele Baker, 20, a University of Washington sophomore, was one of the self-described “anti-fascists” who turned out Feb. 10 to disrupt a campus rally by College Republicans and members of the Vancouver, Washington-based conservative group Patriot Prayer. He admitted to the Seattle Times to being “pretty belligerent.”

Being belligerent in the suppression of free speech is not exactly what Sen. Barry Goldwater, R-Ariz., had in mind when he said, “Extremism in defense of liberty is no vice. Moderation in pursuit of justice is no virtue.”

The Seattle newspaper reported that five people were arrested, American flags were burned, and police had to use pepper spray to separate demonstrators at the rally, staged by supporters of President Donald Trump and others to promote free speech.

They were greatly outnumbered by the “anti-fascists,” who showed their true colors in the university’s aptly named Red Square in seeking to stifle speech that included chants of “USA! USA! USA!” and signs reading “We died for liberty, not socialism.”

Chevy Swanson, president of the school’s College Republicans, explained that the aim of the rally was to enable campus conservatives to freely air their views and promote their free speech rights.

One would think no one could possibly oppose such seemingly universal values—but if you thought that, you would be wrong.

It merits noting here that there are no comparable instances of conservative activists seeking—“by any means necessary,” per the left’s formulation—to shut down or shout down speeches or rallies by liberal groups.

“No one on the hard left is censored these days. The same cannot be said for the hard right or sometimes even the center-right,” said liberal-leaning (but levelheaded) Harvard Law School professor Alan Dershowitz.

He said that in a harshly critical review in The Washington Post of a new book, “Must We Defend Nazis?: Why the First Amendment Should Not Protect Hate Speech and White Supremacy.” In that book, authors Richard Delgado and Jean Stefancic advocate what Dershowitz says amounts to a “free speech for me, but not for thee” credo favoring the left.

Wittingly or unwittingly, university administrators are often complicit in the suppression of conservative speech on campus, cloaking it in a concern for public safety.

The University of Washington sought to charge the College Republicans group a $17,000 security fee, but was blocked from doing so by U.S. District Court Judge Marsha Pechman, who held that such an exorbitant fee would effectively shut down the group’s free speech rights.

Free speech shouldn’t cost $17,000, especially when public safety wouldn’t have been an issue at all were it not for the intolerant, violent left.

Pechman, a 1999 judicial appointee of President Bill Clinton, rightly vetoed what effectively would have been a heckler’s veto. Hopefully, it’s the start of a long-overdue trend to prevent the left from silencing speech it doesn’t like.

To that end, the Young Conservatives of Texas group is taking Lone Star College to court to regain its official status on campus. It filed suit in late January after its recognition was yanked when the group’s faculty adviser quit, saying the group’s views on abortion were somehow inconsistent with the college’s position.

Without a faculty sponsor, the group’s status as a registered club was revoked, rendering it ineligible to use meeting rooms or hold events on campus.

The Texas group filed its lawsuit at about the same time as the Justice Department under Attorney General Jeff Sessions sided with two conservative groups that have sued the University of California at Berkeley.

The Young America’s Foundation and the Berkeley College Republicans say that administrators had sought to curb their free speech rights by creating logistical and other hurdles—including curfews and venue restrictions—to hosting events featuring conservative speakers on campus.

Meanwhile, state lawmakers in Florida are considering legislation that would require the state’s 12 public universities to conduct annual nonpartisan surveys on “viewpoint diversity” and “intellectual freedom” on campus.

An amendment requiring the surveys was added to a wider higher-education bill that was approved nearly unanimously in mid-January by the state House Post-Secondary Education Subcommittee.

Florida House Majority Leader Ray Rodrigues, a Republican, said the aim of his amendment is to assess “the extent to which competing ideas, perspectives, and claims of truth are presented” and how “safe and supported” those on campus feel in expressing their views.

Rodrigues said he knew of no other state conducting a similar viewpoint diversity and intellectual freedom survey on its college and university campuses. But if the trend of leftists obstructing free speech continues, perhaps other states will follow Florida’s lead.

Free speech is one of the most basic rights protected by our Constitution, and the university, of all places—which claims to be the freest and most open forum for public debate—is now a major inhibitor of free speech.

Simply put, the heckler’s veto must be overridden.