4 Cases to Watch at the Supreme Court This Month 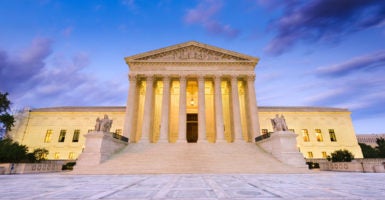 The Supreme Court will reconvene next week to hear cases on public employee unions, digital privacy, free speech at the polls, and more. (Photo: SeanPavonePhoto/Getty Images)

The Supreme Court is scheduled to return to Washington next week after nearly a month off. The justices will hear a number of important oral arguments, including cases involving free speech, public employee unions, and digital privacy.

Here are four cases to watch.

On Feb. 26, the Supreme Court will hear the arguments in one of the most anticipated cases of the year, Janus v. American Federation of State, County, and Municipal Employees, Council 31.

This case involves forcing public employees who opt out of union membership to pay a fee for the “fair share” of costs associated with collective bargaining. Mark Janus, an Illinois state employee, argues that forcing him to subsidize the union he has declined to join violates his free speech and free association rights.

The court will look at whether to overturn its 1977 decision in Abood v. Detroit Board of Education, which held that public employees could be forced to pay an agency fee.

>>> Watch a live Heritage Foundation event addressing this case and others.

Now, with the addition of Justice Neil Gorsuch, the court should reach the merits in Janus.

On Feb. 27, the Supreme Court will hear arguments in United States v. Microsoft Corp. This case deals with whether the Stored Communications Act applies to emails stored outside the United States.

This federal law enhances the privacy of emails stored by third parties and allows law enforcement to obtain emails from providers after securing a warrant.

There is generally a presumption against extraterritorial application of U.S. law without Congress expressly authorizing it. In this case, the U.S. government demanded Microsoft turn over email data stored on a server in Dublin, Ireland, pursuant to the Stored Communications Act.

There also are Irish and European Union laws that could implicate the privacy of this data, and world leaders have criticized the United States for trying to sidestep an existing treaty related to law enforcement cooperation.

Since there are proposals pending in Congress to amend the law, the court ultimately may decide it isn’t the right branch of government to tackle this issue.

On Feb. 27, the Supreme Court will hear Lozman v. City of Riviera Beach. This is Fane Lozman’s second trip to the high court.

Back in 2013, the court ruled for Lozman in his lawsuit to save his home (which is a boat) from seizure by the city as part of its plan to redevelop the marina where he resides.

Lozman is an outspoken critic of this plan, and he was arrested at a City Council meeting where he attempted to speak out against corruption on the City Council. He was charged with disorderly conduct and resisting arrest, but the state’s attorney dismissed the charges shortly thereafter.

Lozman then filed a Section 1983 civil rights action against the city, arguing that his arrest was retaliation for opposing the development plan and engaging in protected speech. The issue before the court is whether his claim is barred because the arresting officer had probable cause to make the arrest.

Free Speech at the Polls

On Feb. 28, the Supreme Court will consider limits on passive political speech at the polls in Minnesota Voters Alliance v. Mansky.

The state of Minnesota forbids people from wearing apparel with political messages at or near polling places on Election Day, and violations (which are subject to a $5,000 fine and possible criminal charges) include someone wearing a “Don’t Tread on Me” T-shirt and a “Please I.D. Me” button.

This could have implications for all kinds of messages that may or may not be considered “political”—”#MeToo,” “Love Wins,” “Choose Life,” “The Future is Female,” and many more.

These are just a few of the cases coming up at the Supreme Court. Later this spring, the justices will hear challenges to the latest version of the travel ban, redistricting in Texas, whether California can force pro-life pregnancy centers to advertise the state’s free abortion program, and many others.