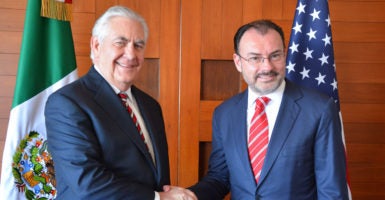 Secretary of State Rex Tillerson just wrapped up a multinational journey of Latin America and, by all accounts, the trip was a resounding success.

Oddly enough, what continues to make headlines is not the successful visits to leaders in Mexico, Argentina, Colombia, Peru, and Jamaica.

Nor are the headlines about the Mexican foreign minister, Luis Videgaray, declaring that Mexico’s relationship with the Trump administration is closer than with his predecessor.

It was a remark he made at University of Texas, Austin prior to the tour about the success and continued relevancy of the Monroe Doctrine. As usual, administration critics attacked Tillerson’s statements as outdated and intrusive. What they failed to recognize is that the Monroe Doctrine was never about American interventionism. In fact, it was clearly the opposite. As stated in the first paragraph:

… the American continents, by the free and independent condition which they have assumed and maintain, are henceforth not to be considered as subjects for future colonization by any European powers …

At that point in history, countries in Latin America were gaining their independence from their European colonizers. Simon Bolivar and his troops had recently liberated the Andean countries of Colombia, Ecuador, Panama, and Venezuela from Spain. By 1826, the vast majority of the region was independent of aggressive colonial powers.

Supporting the notion of the Latin American sovereignty was arguably based more on principle rather than actual capability. During the 1800s, the U.S. military was very small. The Army was roughly 6,000 men. In contrast, the French army was around 100,000 men in 1813 and the British army was near 250,000. The U.S.’ offensive capabilities were quite limited.

The idea of preventing further European encroachment into Latin America was in the self-interest of the U.S. and these newly freed countries. It was never about establishing the Western Hemisphere as a zone of U.S. control. The U.S. often worked in cooperation with much of the region to prevent hostile European powers from establishing platforms in the region. That teamwork still continues and has paid off.

Excluding Cuba and Venezuela, Latin America is full of strong democracies. Twelve of the U.S.’ 20 free trade agreements are with countries in the region.

As such, the same principle of countering aggressive foreign powers should still hold true. The Heritage Foundation’s Index of U.S. Military Strength highlighted the dangerous trends in the region.

America’s geopolitical foes have exploited and will continue to exploit the region’s proximity to the U.S. homeland by seeking relationships with willing regional partners to counter U.S. influence.

One of America’s primary adversaries, Russia, is developing strategic regional partnerships in the form of military cooperation, arms sales, trade agreements, and even cooperation in counternarcotic operations. In addition to high-profile visits by the Russian Navy’s Interfleet Surface Action Group to Cuba, Nicaragua, and Venezuela, Russia used a regional exercise to deploy two long-range strategic bombers to Venezuela and Nicaragua and, following its annexation of Crimea, announced plans to build military bases in Nicaragua, Cuba, and Venezuela.

The People’s Republic of China (PRC) has been another active player in the region. Much of China’s engagement has focused on expanding bilateral economic relations and major investments in infrastructure development projects. Currently, the PRC has proposed to invest $40 billion in constructing an interoceanic canal in Nicaragua that is set to rival the Panama Canal.

Iran’s growing presence in Latin America has raised concerns in the U.S. Tehran has spent the past decade increasing its regional economic relations and diplomatic presence, particularly in the ALBA countries.

Russia’s imperial ambitions are a direct national security threat for the U.S. and its partners. Its erosion of basic freedoms in its own country paints a stark picture for its version of cooperation. China’s state-centric model of economic development underscores its engagement is not benign and is tailored to advance its geopolitical ambitions.

Whereas U.S. engagements come with good governance requirements, China’s lack of standards purposefully weakens the shared values of our democratic hemisphere. Underscoring this is China’s pressuring of Latin American countries to cut relations with democratic Taiwan.

In addition to Russia and China, Iran also causes issues in this region. Iran’s pursuit of nefarious policies such as its continued support for terrorism will remain a challenge for the U.S. Its proxy Hezbollah has an established presence in the region and has known drug, weapons, and illicit contraband traffickers.

Seeking to disrupt and address these activities is not American interventionism but is sound regional policy.

Geography is destiny and the U.S.’ foes will continue to use the region’s proximity to their advantage. The stakes are high and the nation’s chief diplomat should continue rallying the region behind these shared threats.