Why the US Must Keep Working With Honduras, Despite Cases of Corruption 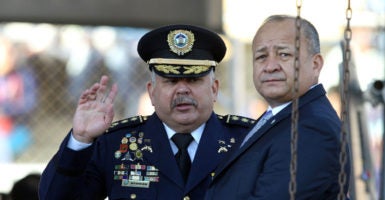 Ryan Carpenter is a member of the Young Leaders Program at The Heritage Foundation.

This occurred in 2013. Honduran police officers had intercepted a cocaine shipment bound for the estate of a cartel leader when Aguilar intervened, ordering the drugs to be sent back to the cartel. At the time, he was chief of intelligence for Honduras’ National Police.

This is not the corruption scandal to implicate the Honduran security forces. Back in 2009, the same cartel leader who Aguilar assisted in 2013 ordered Honduran police officers to assassinate the country’s anti-drug czar—and they did so. These are just some of the most notable examples.

In light of these revelations, some progressives are now questioning whether the U.S. ought to continue working with the Hondurans. But disengaging would be a critical mistake.

Honduras has long been a vital partner for the U.S. in helping to counter threats to both the region and the U.S. homeland. Honduras is uniquely positioned to help the U.S. stem the tide of drug trafficking and to help mitigate the flow of unlawful immigration.

Honduras sits right at the intersection of the drug-producing countries in South America and the drug-consuming population in the United States. Honduras is a doorway between these two regions that could stay open to narcotrafficking and other illicit goods.

But of course, corruption makes it all the more difficult to close that door.

Corruption continues undermining Honduras’ ability to effectively act in its own national interests. Police are aiding crime rather than disrupting it, politicians are protecting criminal interests, and the public is losing faith in the nation’s institutions.

Recently re-elected President Juan Orlando Hernández has pledged to continue efforts to fight crime and corruption, efforts that he began during his first term and which are considered his successes thus far.

In 2016, for instance, Honduras established a deal with the Organization of American States that created the Mission to Support the Fight Against Corruption and Impunity in Honduras (Misión de Apoyo Contra la Corrupción y la Impunidad en Honduras, or MACCIH). In 2017 alone, this mission played a key role in the investigation and conviction of government and private-sector officials accused of corruption.

But the progress is far from complete. As the Congressional Research Service notes, “many analysists maintain that Honduras lacks the institutions and resources necessary to tackle these challenges on its own.”

Honduras must also work on improving its rule of law practices. According to The Heritage Foundation’s Index of Economic Freedom, Honduras ranks 108th globally in judicial effectiveness and 126th in government integrity out of 180 countries measured. Honduras is ranked 21st in the region out of 32.

Honduras has seen no substantial improvements in these categories in years, and the trends show progress as stagnant.

Recurring instances of corruption within Honduras’ government, such as the case of Aguilar, should not cause the U.S. to disengage. The U.S. must continue to work alongside its Honduran partners to strengthen and develop its institutions.

Doing so will pay off in the long run. Strengthening Honduras’ institutions will increase their capacity and ability to cooperate with the U.S.