One Congressman Wants to Ban Flamethrowers. Why That Idea Is Wrongheaded. 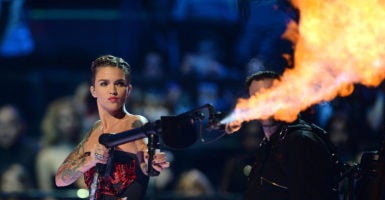 A misguided bill in Congress would turn thousands of people who bought flamethrowers last month into criminals, once again illustrating America’s overcriminalization problem.

In January, Elon Musk, creator of Tesla and SpaceX, sold a limited supply of 20,000 flamethrowers at $500 each to advertise and raise funds for his transportation-tunnel drilling business, the Boring Company.

But Musk had another promotional offer: “Buy an overpriced Boring Company fire extinguisher! You can definitely buy one for less elsewhere, but this one comes with a cool sticker … .”

Apparently, some lawmakers never want to let a good jest go to waste.

The bill would make it a federal crime to transfer or possess a flamethrower, punishable by fines and up to 10 years in prison.

Engel wrote that the bill’s title “was inspired by the ‘Saturday Night Live’ ‘Really!?! With Seth and Amy’ segments Seth Meyers and Amy Poehler used to do, lampooning things that were so ridiculous, you couldn’t help but say to yourself, ‘Really?’”

Engel found it ridiculous that there were not enough flamethrower regulations on the books, writing that “only [two] states regulate the sale of flamethrowers, and no federal regulations exist of any kind (seriously).”

But that description of the law is incomplete.

As I wrote in a prior post, when this bill was initially introduced:

While flamethrowers can be dangerous, they are not linked to any actual national interest. The bill would treat flamethrowers the same as machine guns under federal criminal law, imposing penalties of fines and prison terms of up to five, 10, or more years under Chapter 44 of Title 18 of the United States Code.

Since there is no national flamethrower problem, but there are some lawful, commercial uses, the bill is yet another example of overcriminalization.

The lack of a national flamethrower problem can be seen from the scarcity of flamethrower-related cases within FBI crime data and Department of Justice annual prosecution data.

Joshua Prince, an attorney with the Firearms Industry Consulting Group, said there has not been “a documented case of an individual using a flamethrower in commission of a crime.”

And that makes sense, since flamethrowers aren’t exactly the first choice for someone who wants to rob a bank or steal a car: Pull the trigger, and you burn the cash or blow up the car; get in a shootout, and it might be you who blows up.

If someone were to commit a crime with a flamethrower, there are plenty of federal and state laws that would prohibit and punish all of the harmful conduct that could conceivably result. So, there’s no factual or legal need for a federal flamethrower bill.

Murder, manslaughter, and arson are prohibited and routinely prosecuted, in virtually every state.

Indeed, they are some of the oldest crimes on the books.

Two states regulate flamethrowers directly: Maryland bans them, while California permits them, but “only on film and television sets.”

Under the general 10th Amendment police power, states can and should regulate flamethrowers if there is some compelling reason to do so. But, as it happens, there are also a number of federal criminal and civil rights statutes that could be used, depending on the circumstances, to prosecute someone for unlawful use of a flamethrower.

Although there are few, if any, instances where a flamethrower has been used to commit a crime, according to Prince, they are occasionally used for lawful and beneficial purposes.

Roofers, for instance, use them to install rubber roofing, “whereby the flamethrower is utilized to heat the roofing material, until the asphalt melts and interlocks with the roofing surface.” They are used to “ignite controlled burns in relation to sugar cane, bamboo and other, similar invasive plants.”

Not only are there lawful, economic uses for flamethrowers and few if any criminal uses, but there are also few incidents of harm associated with flamethrowers—and far more lethal things that have yet to be criminalized.

“There were zero injuries or deaths from flamethrowers last year in the state of New York”—Engel’s own home state.

Manipulating criminal legislation for a political stunt risks locking up morally innocent farmers, roofers, and other individuals in federal prison.

The mere passage of time has not made that eventuality any more desirable. Nor has it made this bill something other than a solution in search of a problem.

As former Attorney General Edwin Meese III said in 1998, federalizing state and local crimes “invites selective prosecution, and disparate enforcement and punishment. Federal officials determine, usually on the basis of political factors, whether they will get involved in a case.

“So, really what we need in this country,” Meese continued, “are some statesmen who are willing to stand up and say, ‘Let’s not make a federal case out of this.’”

Anyone who uses a flamethrower should do so lawfully and carefully, and be prepared to answer to local police if they do not. But the “Flamethrowers? Really? Act” should once again be consigned to the ash heap of history.