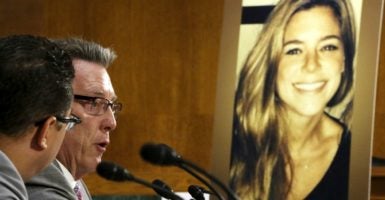 Jim Steinle, father of murder victim Kathryn Steinle, testifies about his daughter's murder during a hearing of the Senate Judiciary Committee in 2015. (Photo: Jonathan Ernst/Reuters/Newscom)

One bill, Kate’s Law “enhances the current maximum sentences for illegal reentry into the United States, serving as a strong deterrent for deported felons seeking to come back to the United States,” according to its sponsor, Rep. Bob Goodlatte, R-Va. It passed 257-167. The other bill, the No Sanctuary for Criminals Act, deems sanctuary jurisdictions, cities, and states that do not cooperate with immigration officials or enforce immigration laws, ineligible for certain types of federal funding. That passed 228-195.

“The death of Kate Steinle and too many others are tragic,” said Goodlatte, who chairs the House Judiciary Committee, in a statement. “Her death is particularly devastating since it could have been prevented if our immigration laws had been enforced. The person responsible for her murder was a known felon who had been deported numerous times. There is no reason he should have been free to roam our streets and take away Kate’s life.

Both bills were authored by Goodlatte.

Kate Steinle, 32, was killed July 2015. An illegal immigrant, Juan Francisco Lopez-Sanchez, was charged after her death and is awaiting trial. At the time of the shooting, Lopez-Sanchez was a “seven-time convicted felon and five-time deportee.”

President Donald Trump spoke about Steinle during his presidential campaign as evidence that the U.S. needs stronger immigration policies. “This senseless and totally preventable act of violence committed by an illegal immigrant is yet another example of why we must secure our border immediately,” Trump said in 2015, according to CNN.

Lopez-Sanchez’s trial is expected to take place sometime this year.