Right Side of History: The Founders Had an Answer to the ‘Fake News’ Problem 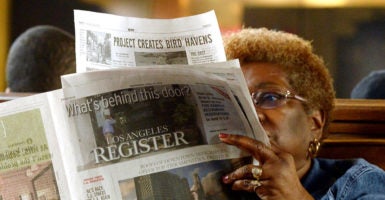 On this week’s episode, hosts Jarrett Stepman, a contributor to The Daily Signal, and Fred Lucas, The Daily Signal’s White House correspondent, discuss the fake news phenomenon, the history of media in America, and current threats to free speech rights. Laws to regulate news are already on the books in some European countries.

The debate boils down to who decides what is truth, the government or the people?

Stepman wrote about the history of fake news and how the Founding Fathers dealt with it.

Stepman and Lucas were joined by Michael Gonzalez, a senior fellow at The Heritage Foundation who spent 11 years writing for The Wall Street Journal, and Rob Bluey, editor-in-chief of The Daily Signal.

Gonzalez recently wrote in The Daily Signal about how the “fake news” phenomenon is now dangerously being used by the left for the sake of viewpoint discrimination. Bluey was the first journalist to debunk Dan Rather’s fake story about George W. Bush’s military service on the eve of the 2004 presidential election.