The Founders Anticipated ‘Fake News.’ Here’s What They Did About It. 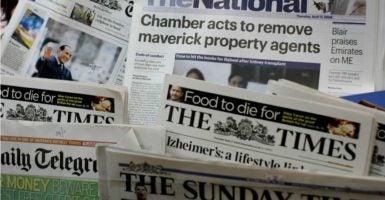 Hyperpartisan, scurrilous, and even phony news stories have been more common than uncommon throughout American history. (Photo: Andrew Parsons/ZUMA Press/Newscom)

Following the presidential election, numerous stories surfaced about how “fake news” influenced the results. This prompted a reaction from the media and a concerted effort by the social media giant Facebook to crack down on the phenomenon—announcing that it would in part by using liberal fact-checkers to distinguish the “real” from the “fake” news.

The truth is that while the American media landscape has been in a constant state of change over two centuries, the spread of hyperpartisan, scurrilous, and even phony news stories has been more common than uncommon throughout the history of the republic.

Ultimately, despite the increasingly Wild West state of journalism, Americans have been better at finding the truth than less free societies.

The media response frames the fake news issue as nearly the single greatest threat to democracy in our time. But despite the worries that surround an uptick in fraudulent news, the phenomenon is nothing new, nor does it particularly portend dark times in America’s future.

The overreaction in response, potentially damaging both the right to free speech and a culture that supports it, may be more dangerous to a free society.

The idea that the press could try to deceive rather than enlighten readers was not lost on the Founders. In the years before and after the American Revolution there was an explosion of printing presses throughout the Western world as improved printing technology was becoming widely available.

Journalists and pamphleteers were certainly vital to spreading the ideas of American rebellion against the English—names like Thomas Paine and Samuel Adams were nearly synonymous with the American Revolution, and they certainly weren’t alone. Though propaganda and distortion of the news were common as well.

After America gained independence, there were still huge numbers of scribblers writing about news and politics with varying levels of credibility and accuracy.

When the framers of the Constitution met to discuss the construction of the new government at the Constitutional Convention in 1787, freedom of the press and what it would mean for the future of the country was certainly on their minds.

Many Founders fretted about what the proliferation of false or destructive notions would mean for the idea of democracy and a society of mass political participation.

Massachusetts delegate Elbridge Gerry lamented how the people in his home state were being led astray by false stories from malcontents and manipulators.

“The people do not want [lack] virtue, but are the dupes of pretended patriots,” Gerry said. “In Massachusetts it had been fully confirmed by experience, that they are daily misled into the most baneful measures and opinions, by the false reports circulated by designing men, and which no one on the spot can refute.”

So what did the Founders do to stop this problem? They created a system of government that would allow room for democracy, yet checked its vices: through institutions like Congress, the constitutional amendment process, and division of power between branches of government as well as the states and federal government. Not to mention the Electoral College, which the modern left now decries as unfair and undemocratic.

Unfortunately, some of these checks have been eroded over time and continue to be undermined. For instance, the 17th Amendment forced states to elect senators through a popular vote rather than have the state legislature choose a representative, which has reduced the power of the states in the American system.

And in some states, like California, the requirement to pass a constitutional amendment is simply 50 percent of the vote plus one, yet again increasing the chance that a temporary excitement of the populace can lead to rapid, negative changes in governance.

The weakening of the structural checks on democracy has been the greater threat of fake news’ proliferation than nonsense peddlers themselves.

Tocqueville on the ‘Liberty of the Press’

It was not only the Founders who understood the trade-offs between a free press and misleading news. Alexis de Tocqueville, the famed French observer of American life, wrote about the freedom of the press in his 1835 book “Democracy in America.”

Tocqueville noted that when he arrived in the U.S., the very first newspaper article he read was an overheated piece accusing then-President Andrew Jackson of being a “heartless despot, solely occupied with the preservation of his own authority” and a “gamester” who ruled by corruption. This type of account was not unusual.

The years following the founding saw a booming and free-wheeling publishing industry, unimpeded by the licensing and restrictions common in other countries. Freedom allowed newspapers to proliferate throughout the United States in a highly decentralized way.

And in early American history, most newspapers were expressly partisan or outright controlled by individual politicians. They often aggressively attacked and made outrageous comments about political opponents.

Yet Tocqueville wrote that despite the general vehemence of the press, America was further from actual violence and political revolution than other societies that tightly controlled information.

While recognizing the occasional problems of an unimpeded fourth estate, Tocqueville wrote that “in order to enjoy the inestimable benefits that the liberty of the press ensures, it is necessary to submit to the inevitable evils that it creates.”

An attempt to submit “false” news and opinions through an official fact-checker would likely only elevate and perhaps justify a false opinion in the minds of the people, according to Tocqueville.

He continued to write that expecting to have the good of a free press without the bad has been “one of those illusions which commonly mislead nations in their times of sickness when, tired with faction and exhausted by effort, they attempt to make hostile opinions and contrary principles coexist upon the same soil.”

Americans were so used to being bombarded with opinions and information from a diverse media, Tocqueville wrote, that they were less likely to react to falsehoods and outrageous opinions.

Fake News existed in that time as well as ours, but it did little to outright convince people to change their views. This continues to be the case today.

Tocqueville concluded of a free press:

When the right of every citizen to a share in the government of society is acknowledged, everyone must be presumed to be able to choose between the various opinions of his contemporaries and to appreciate the different facts from which inferences may be drawn. The sovereignty of the people and the liberty of the press may therefore be regarded as correlative, just as the censorship of the press and universal suffrage are two things which are irreconcilably opposed and which cannot long be retained among the institutions of the same people.

The visiting Frenchman understood what Americans have almost always believed. Occasional false news stories cannot destroy a society fitted for liberty, but extreme efforts to contain them will.

The Search for Truth

The reality is, barriers to prevent modern Americans from receiving “fake news” are unlikely to succeed in a free society where a mass of information is readily available.

The internet, and a lack of trust in the legacy media, has allowed numerous new media publications to find success. It has again radically decentralized the way Americans get their information.

These legacy media organizations are attempting to reign in the chaos with new gimmicks like fact-checkers, but ultimately their influence and credibility are fading in the minds of Americans as fewer people trust or desire to read those sources.

This isn’t an anomaly in American life—it has been the norm. We must trust and maintain the mediating constitutional system the Founders created along the judgment of the American people.

The freedom of the press, enshrined in the First Amendment and tempered by institutions designed to slow governmental change and thwart temporary excitements of opinion, created a nation incredibly free, yet robust enough to withstand potential large-scale errors in judgment.

The Founders understood that the good would outweigh the bad with a free press, and no court could justly measure the rightness or wrongness of news and public opinion. They realized that without allowing the press to operate freely and leaving the people as its ultimate tribunal, America would never truly be a land of liberty.

Fake or biased news was the willingly paid price of an open society, and the winnowing process of the American system ultimately leads the country toward the truth.