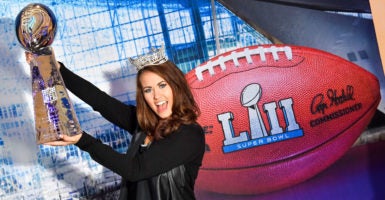 Minneapolis might have terrible traffic issues on Sunday (as any Super Bowl host city would), but it will be one of the safest places in America that day. (Photo: Tom Donoghue/Polaris/Newscom)

This weekend, America will once again sit down to watch the “world championship of American football” (our overseas friends indulge us).

Make no mistake: There are bad guys out there who wish America and its people ill and who would drool over successfully hitting this weekend’s target.

The U.S. Secret Service steps in as the lead agency and brings along with it the full panoply of federal security capabilities and experiences.

Some folks will snicker and say, “I’ve seen that in the movies. The Feds come in, ignore the locals, and then mess everything up!” That could not be further from the truth.

The city of Minneapolis and the state of Minnesota will remain key players in the now very complex dance that will be occurring on Super Sunday. Their experience and knowledge of local threats, assets, traffic patterns, and personalities are critical to success.

In addition to all that, they will now have access to federal intelligence and law enforcement databases, hundreds of trained K-9 teams (most from the military), detection teams for nuclear, chemical, and biological hazards, and response/mitigation teams for those weapons of mass destruction.

While the aircraft that screen out any unauthorized over-flights will undoubtedly come from local Air National Guard units, their command and control will now be handled by the U.S. Northern Command. In addition to Minneapolis police SWAT teams, the FBI hostage rescue team and military Tier 1 counterterrorism assets will be nearby.

In the past few weeks, the leadership teams of all these elements have been working together to produce the best plans, drills, and overall readiness to ensure the safety and security of the game and all the folks who go inside the stadium, or who are even in the vicinity.

Minneapolis might have terrible traffic issues on Sunday (as any Super Bowl host city would), but it will be one of the safest places in America that day.

That is not a foregone conclusion, but rather the result of an enormous amount of hard work and sacrifice.  We should all thank those men and women of local, state, and federal law enforcement agencies, first responders, our military, and our intelligence agencies.

They will not be enjoying the game with a beer and a bratwurst. They will be on duty, keeping us secure.