Why the State Can Never Get Out of Marriage 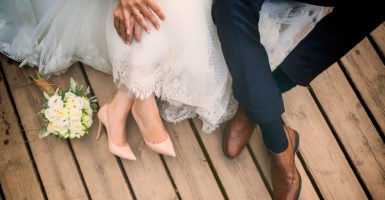 The effort to "privatize" marriage would not result in government neutrality on the definition of marriage, but rather a government endorsement of expressive individualism. (Photo: verve231/Getty Images)

As conservatives have suffered a series of setbacks in the culture wars, some have become tempted to wish away any further conflicts about marriage and the family by getting the government out of the marriage business altogether.

“Better to have no state recognition of marriage at all, than for the state to recognize marriages badly,” goes the argument.

Conservative columnist John Fund, for instance, during the same-sex marriage debate, thought the “cherished principle of separating church and state should be extended as much as possible into separating marriage and state,” while Catholic theologian Douglas Kmiec counseled believers to “untie the state from this problem” of defining marriage.  Marriages would then be the concern of the families themselves, aided by churches and local communities.

Sen. Rand Paul, R-Ky., in an essay for Time, expressed concern that efforts to redefine marriage at the national level would put religious liberty at risk, because churches would be accused of discrimination if they do not endorse same-sex marriage.

In Paul’s view, protection for churches requires that the national government stay out of the marriage business.

But this approach offers a false sense of security, as I argued in an essay, “Can the State Be Neutral on Marriage?” State neutrality is an illusory promise.

Contemporary liberals and libertarians seeking to “privatize” marriage suggest that it will promote individual freedom and safeguard a space for diverse lifestyle choices.

The state allows people to choose Coke or Pepsi or bottled water when they’re thirsty, so why shouldn’t the state allow people to define marriage for themselves?

This aspiration for neutrality betrays a truth that liberals recognize in many other contexts: There is in fact no such thing as neutrality. The choice to allow choice is itself a choice, shaped by particular moral considerations and creating inevitable long-term ramifications.

Every political community depends upon married adults having children and raising them to responsible adulthood. All communities depend on people finding joy and fulfillment in having and raising children.

Yet none of these traits of character arise spontaneously.

Stable marriages, where parents take responsibility to supervise the formation of their children’s character, are crucial to developing such qualities. Those defending the family are seeking to preserve the ethic of community, responsibility, and self-government, which can be developed only in families.

Those who call for the privatization of marriage and the family, on the other hand, are pushing an ethic of individualism, self-expression, and individual liberation.

Liberals have won many victories in the effort to cultivate the ethic of expressive individualism. Obscenity laws have been loosened. Pornography is now more widely available and consumed. Divorce is easy to access. Premarital sex and adultery are not proscribed by law. And same-sex marriage has finally detached the institution of marriage from its legal grounding in parental purpose.

Cutting-edge liberals even suggest that families be replaced with “intensive caregiving” units.” Under this scheme, the state would recognize and support “caregivers” (whoever they happen to be), replacing the idea of parental rights and responsibilities. Birth would no longer determine who a parent is—state recognition for “caregiving” rights would.

This clash of worldviews is what underlies the debate over government neutrality about marriage.

Some liberals will not only seek to further open up marriage to new forms of relationships through plural marriage and adult incest, they will also likely seek to further erode the habits that ground monogamous love—for instance, by eroding laws against public nudity, further deregulating obscenity, and legalizing prostitution.

This will culminate in a compromise of parental rights over their children, achieved by decreasing parental direction over education and by securing the choice of a child’s gender. There can no agreed-upon mechanisms for the state to acknowledge parenthood if the family is entirely privatized.

Who can tell where this rolling revolution will lead?

Advocates of privatizing marriage suggest that those who desire a life of devoted monogamy, dedicated to raising children, are still free to do so without the interference of the law and without cultural disapproval.

There is some truth to that. Responsible marriage and family life is not so much outlawed as it is compromised, dishonored, and burdened.

People are social creatures: The predominant culture, shaped in part through laws, affects everyone. The ever more complete victory of the culture of expressive individualism weakens marriage and undermines the qualities of character upon which America depends.

Those who care about the future of democratic self-government must see through the fake aspiration to neutrality and work to return the question of character to politics.

The country may not always be willing to listen or follow this advice, but proponents of family life and self-government must continue to show that laws are not neutral and that they affect the culture in myriad ways.

We must engage in the long-term project of reconstituting a more responsible culture, one more open to an ethic of self-control.