Why Do Immigration Hawks Hate the White House’s DACA Framework? 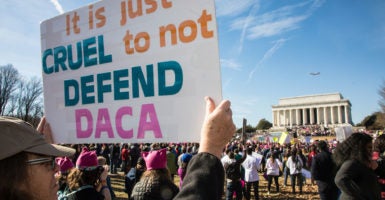 The Trump administration just can’t seem to thread the needle on negotiations over the Deferred Action for Childhood Arrivals program.

Its latest plan for a compromise was rejected out of hand by liberal Democrats and activists, as expected. And for entirely different reasons, the framework was also torn apart by immigration hawks and restrictionist groups, who panned it as a self-defeating giveaway to Democrats.

NumbersUSA called the plan a repeat of a “disastrous” amnesty proposal from the late Democratic Sen. Ted Kennedy and the George W. Bush administration that the group helped defeat in 2007. The hugely influential Heritage Action for America said the framework opens a “Pandora’s Box” of future immigration problems and called it a non-starter for negotiations over the soon-to-expire DACA.

Teased Thursday as a DACA compromise that could meet a 60-vote threshold in the Senate, the White House framework contains several provisions that immigration restrictionists have advocated for decades. It would end the Diversity Visa Lottery, restrict family-based immigrant visas to spouses and minor children, and set up a $25 billion trust fund to build the border wall.

In exchange, about 1.8 million younger illegal immigrants—the number of people eligible for DACA under the program’s original guidelines—would be offered a path to citizenship.

For immigration hawks, that number is simply too generous. Many had conditioned reluctant support for a path to citizenship—what they call amnesty—on limiting eligibility to just the 790,000 people who actually received DACA protections, not the much larger pool of younger illegal immigrants who might have qualified for the program.

NumbersUSA, the country’s largest grassroots group that advocates lower immigration, and the Center for Immigration Studies had endorsed a separate House Republican bill in large part because it proposed a limited amnesty for DACA recipients only. Expanding that pool is unnecessary and unjustified, Krikorian says.

“The reason they have a compelling case for amnesty before all enforcement measures and in place and legal immigration curbed is that not only did they arrive here as minors but they voluntarily came forward and provided their information to the government,” he wrote in a blog post Thursday. “Those who chose not to do so should not be granted the same extraordinary act of mercy.”

Krikorian and others have also argued the chain migration provisions of the White House plan are toothless because they don’t kick in until the roughly 4 million people on the visa waiting list are admitted. The plan calls for a reallocation of the green card lottery visas to help expedite processing, but immigration skeptics warn that it could be a decade or more before the backlog is cleared.

Under the Trump framework, “young-adult illegal border crossers and visa overstayers would get immediate benefits,” while American workers get “little or no relief from the competition of chain migration for 15 to 20 years,” argues NumbersUSA.

Not all conservative immigration reformers are disappointed with the White House plan. Trump allies Sens. Tom Cotton, R-Ark., and David Perdue, R-Ga., the Senate’s leading immigration hawks, have both praised the framework as the foundation for an immigration reform bill that can get to 60 votes in the upper chamber. Their endorsement could help the White House shore up its right flank as it pressures moderate Senate Democrats to back the plan.

Even so, if Trump administration intends to move forward with the framework as currently written, it will have to do so without the backing of several influential immigration policy allies. NumbersUSA President Roy Beck says his group has “no choice” but to oppose any bill that mirrors the White House plan.

“NumbersUSA mobilized our huge grassroots army to defeat the 2007 amnesty, and we will do the same if this plan is proposed next week,” he said in a statement Thursday night.