University of Virginia Betrays the Legacy of Its Founder, Thomas Jefferson 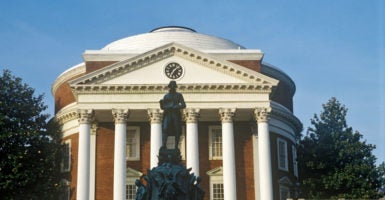 Thomas Jefferson, who founded the University of Virginia, stressed the need for a bill of rights that included freedom of speech. (Photo: Joseph Sohm Visions of America/Newscom)

The Thomas Jefferson Center for the Protection of Free Expression, which is located in Charlottesville and is dedicated to “the defense of free expression in all its forms,” gives out annual awards called the “Jefferson Muzzles” to individuals and organizations responsible for “especially egregious or ridiculous affronts to free expression.”

The center’s first such award this year should go to the Jefferson-founded University of Virginia (which has close ties to the center) and Patrick D. Hogan, the university’s executive vice president and chief operating officer.

Hogan might also benefit from sitting in as an observer at one of the University of Virginia School of Law’s classes explaining the basic tenets of the First Amendment.

On Jan. 19, Hogan sent out a “community advisory” in an email to all students, faculty, and staff, warning them that the university was “aware of reports of solicitations by national organizations to encourage distribution of offensive flyers and memes at colleges and universities across the country during the upcoming weekend.”

Apparently, in Hogan’s mind, saying something “offensive” is the same as committing a heinous criminal act. How do we know that? Because his email tells students to call 911 if they see someone “posting offensive flyers or other material.”

No, really. Posting such material violates the university’s “posting and chalking” policy and is included in Hogan’s definition of “suspicious activity.”

Hogan was particularly concerned over any “offensive” material that might be distributed at “buildings and centers for under-represented groups, particularly Women’s Studies.”

In other words, if you decide to exercise your First Amendment right to speak at UVA by, perhaps, calling the “Women’s Study” program a faux social science curriculum, or by pointing out that its graduates may have a very tough time finding a job in which they can actually support themselves, then law enforcement officers will be called to come after you—a total abuse of the 911 emergency response system.

This is apparently UVA’s version of the “Thought Police” from George Orwell’s “1984.”

Hogan also apparently needs a remedial course on the man who founded his university. In 1787, Jefferson sent a letter to James Madison telling him that the failure to include a bill of rights by the delegates to the Constitutional Convention was a mistake:

A bill of rights is what the people are entitled to against every government on earth, general or particular, and what no just government should refuse.

The right to free speech (even when offensive) is, of course, prominently guaranteed in the very first amendment of our Bill of Rights.

I have no doubt that the British Crown authorities found the Declaration of Independence, which Jefferson drafted, deeply offensive. If the 911 system had existed at the time, they would also have asked any colonist who saw the declaration being posted to immediately call law enforcement.

How sad that a great institution of learning like the University of Virginia, started by one of our greatest Founders, has so lost its way that it no longer understands the importance of being a place where there is vigorous debate, discussion, and civil disagreement on public policy and political issues.

While there is no doubt the university must guard against violence and threats of violence, that does not give it a license to curtail any speech that it believes, in the infinite wisdom of school administrators or even students, is offensive or provocative, or does not fit within the ideological orthodoxy that currently prevails on campus.