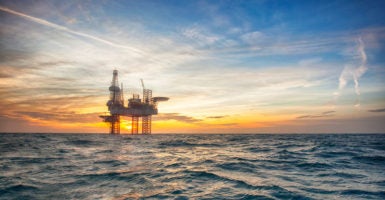 The Department of Interior released a draft plan that would open up large swaths of sea area to oil exploration. (Photo: iStock Photos)

America is moving forward in its march toward energy dominance, and the Trump administration just took an important step forward in achieving that goal.

In unveiling its draft five-year Outer Continental Shelf leasing plan on Thursday, the Interior Department is reversing the Obama administration’s “Keep it in the Ground” anti-energy policy.

An abundance of untapped energy lies beneath America’s ground and off the coasts. For six years, America has been the world’s largest petroleum and natural gas producer, supporting more than 10 million jobs and contributing more than $1.3 trillion to the economy.

The increase in energy supplies has lowered prices for households and businesses. Families are saving hundreds, if not more than $1,000 each year on electricity bills and home-heating costs, and paying less at the gas pump.

It also means companies around the country devote less money to paying energy bills and more to investing in labor and capital.

All of these benefits have accrued to Americans, despite the fact that the Obama administration made a majority of America’s coastal waters off-limits to natural resources exploration and production.

In fact, 94 percent of federal offshore acreage is off-limits to development. The United States is the only country in the world that has placed a majority of its territorial waters off-limits to natural resources extraction.

Until now, that is.

Interior Secretary Ryan Zinke’s draft plan is the first part of a multiyear process that would make more than 90 percent of the total federal acreage available, which includes 98 percent of the undiscovered, technically recoverable oil and gas resources in the Outer Continental Shelf.

As highlighted by Interior’s press release:

The Draft Proposed Program … includes 47 potential lease sales in 25 of the 26 planning areas—19 sales off the coast of Alaska, seven in the Pacific region, 12 in the Gulf of Mexico, and nine in the Atlantic region. This is the largest number of lease sales ever proposed for the National Outer Continental Shelf Program’s five-year lease schedule.

The 47 potential lease sales top the number of sales listed in President Ronald Reagan’s two submissions of 41 and 42.

At several points in time, offshore drilling was not such a partisan issue. When President Jimmy Carter, a Democrat, made his 1979 energy speech, he said, “We will step up exploration and production of oil and gas on federal lands.”

As a result, the Carter administration’s Interior Department proposed 36 lease sales. As recently as 2013, both Democratic senators from Virginia offered legislation to open parts of the Atlantic to offshore development.

Offshore drilling is a critical component of the Gulf of Mexico economy, one of the limited areas where offshore activity takes place in federal waters.

Recognizing that offshore resource exploration is systematically safe, the energy industry has a very strong relationship with the seafood and tourism industries. In fact, Louisiana hosts a Shrimp and Petroleum Festival each year.

Despite the Deepwater Horizon incident that adversely affected the Gulf environmentally and economically, there was a broad recognition among these three industries that the blanket drilling moratorium was bad policy and bad for the region as a whole.

The economic benefits of realizing America’s true energy potential could be significant. Opening the Atlantic and Pacific Outer Continental Shelves and the eastern Gulf of Mexico could create more than 800,000 jobs by 2035.

Increased supplies, which could equate to as much as 3.5 million barrels of oil per day, would lower prices for families.

Furthermore, federal and state governments would stand to benefit as well, since increased production would increase revenues from bonus bids (for new leases), royalties, rents, and increased economic activity.

By 2035, the federal government could collect more than $200 billion in revenue. With the country burdened with massive amounts of federal debt, policymakers should welcome the potential for revenue generation.

No one knows where oil prices will be once the Interior Department finalizes the plan. Therefore, it’s difficult to fully project where the industry will invest.

Nevertheless, the market will determine what areas the oil and gas companies will pursue. The federal government should not stand in its way.

It’s encouraging to see Interior take a hatchet to a long-standing barrier to energy dominance and improved economic well-being.