Pulp Nonfiction: A Tale of Protectionism and Newsprint Producers 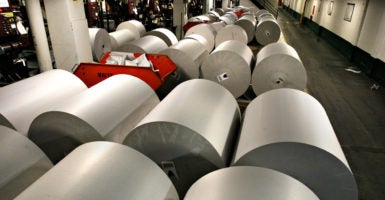 Rolls of newsprint weighing 2,000 pounds each are only part of this story of companies adjusting to changing times without government picking winners and losers. (Photo: St. Petersburg Times/Zuma Press/Newscom)

Which skill is more important, knowing how to run your business or knowing how to get the government to stymie your competitors? The case of a paper mill in Washington state shows the sad answer is “not clear.”

Thirty years ago, you would have been holding a newspaper in your hands while reading this commentary. The tech revolution of the ensuing decades has been great for almost everybody, but not for those making something called uncoated groundwood paper (a.k.a. “newsprint”). However, this is not a secret.

According to their online bios, none of the investment professionals or managing partners at the hedge fund One Rock Capital Partners, which owns the paper mill in question, appear to have any particular experience in the pulpwood paper business.

Even so, they must have known that the newsprint market has been in decline for decades, as physical newspapers lost out to broadcast and digital media. This market has dropped 75 percent just since 2000.

Nevertheless, there must have been reasons for One Rock’s purchase of North Pacific Paper Co., a 300-employee newsprint producer in Longview, Washington. Perhaps the financial and lean-production experience the professionals and managers do claim to have can be transferred to the paper business and help the paper company innovate its way out of a dying business.

However, it looks like until that happens, One Rock is using the other strategy—get the federal government to whack your competitors.

Since newsprint is expensive to transport, competition is primarily regional. So, a big chunk of North Pacific Paper Co.’s competition is just across the border in Canada. The company’s implements of choice in its battle against competition are the anti-dumping and countervailing duty provisions of U.S. trade policy. As with any battle, there is collateral damage.

While trying to protect their year-old investment and, we would hope, some portion of the 300 or so jobs at North Pacific Paper Co., the leaders at One Rock are putting hundreds of thousands of other U.S. jobs at risk. First in line to suffer the effects are those in the declining but still large newspaper and printing businesses. So, it is easy to understand why they strongly oppose the paper company’s tariff request.

However, in a bit of an irony, some American producers of newsprint, and their employees, also will suffer. How can that be?

The pulp paper business in North America is highly integrated, with many producers having assets both in Canada and in the United States. Severing the supply chain connections from Canada or just taxing away a big chunk of a firm’s revenue from north of the border can significantly reduce overall profitability.

That the American Forest and Paper Products Association opposes the attempt by North Pacific Paper Co. to stifle Canadian newsprint sales is evidence of the aggregate net harm to U.S. firms.

So, how does this translate to American jobs? While the market for newsprint has been in decline, opportunities exist to offset this decline by retooling to make other products and to improve efficiency. However, this takes money. If one revenue stream is taxed away because part of your operation is in Canada, that leaves you less of the money needed for the critical changes to stay profitable and to save those U.S. jobs.

Resolute Forest Products is an example. In the past four years, the company has invested more than $600 million in its U.S. operations to adapt to a changing world.

Yes, its newsprint business is in decline. However, even though we baby boomers don’t want to think about it, the market for another pulpwood product, adult diapers, has a rosy future.

North Pacific Paper Co.’s tariff request would hobble the ability of firms such as Resolute to invest in such new and expanding markets.

To create jobs and economic vitality, companies need to have the freedom to use their own resources to get out of dying markets and into growing ones. Taxing those who are doing just that, in order to bail out investors who appear to be doubling down on the proverbial buggy whips, is not good for U.S. workers or consumers.

An “America first” policy is the one that supports the job-creating investment of a dynamic economy. Taxing newsprint is a backward-looking, America-last, investment-last, and jobs-last policy.