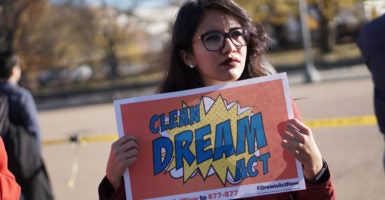 The legislative replacement for the Deferred Action for Childhood Arrivals program favored by most Democrats would add billions to the budget deficit, according to an estimate from Congress’ nonpartisan accounting shop.

The Congressional Budget Office released Friday its score of the Dream Act of 2017, a DACA amnesty bill that would provide legal permanent residence and, eventually, a path to citizenship for well over 1 million younger illegal immigrants. The CBO found that the Dream Act would increase the federal budget deficit by $26 billion over a decade, mostly by conferring eligibility for federal benefits to the amnestied immigrants.

Introduced earlier this year by Sen. Dick Durbin, D-Ill., and Sen. Lindsey Graham, R-S.C., the bill has become the DACA replacement of choice for congressional Democrats. Both Senate Minority Leader Chuck Schumer and House Minority Leader Nancy Pelosi have said they are committed to passing a “clean” Dream Act to legalize DACA recipients and other similarly situated illegal immigrants.

The Dream Act would direct the Department of Homeland Security to give lawful conditional status to illegal immigrants who were under 18 years old when they initially entered the U.S. and have lived here for at least four years prior to the bill’s enactment. Because of the Dream Act’s expansive eligibility criteria, the number of illegal immigrants who would benefit from the Dream Act is far higher than the DACA population of about 790,000.

The CBO estimates that about 2 million illegal immigrants would be granted conditional lawful permanent resident status under the Dream Act. “Roughly 1 million of the 1.6 million people receiving unconditional LPR status would become naturalized U.S. citizens during the 2018-2027 period,” the CBO cost estimate states.

Amnesty for that population would boost the deficit mainly through increased direct spending on Medicaid, health insurance subsidies, and food stamp benefits. On the revenue side, any tax gains from bringing illegal immigrants “on the books” would be largely offset because “increased reporting of employment income would result in increases in tax deductions by businesses,” according to the CBO’s estimate.

“As a result, corporations would report lower taxable profits and pay less in income taxes,” the CBO report added.

Democrats’ push for a “clean” Dream Act is unlikely to result in a DACA replacement before the end of the year, as immigration advocates and their allies on Capitol Hill have demanded.

Though Republicans have expressed support for crafting a legislative fix, both the White House and immigration hawks in Congress have insisted that any DACA replacement bill include border security enhancements and deeper reforms such as limits on chain migration and ending the Diversity Visa Lottery.

Republican leadership has also rejected the idea of including Dream Act provisions in the 2018 spending bill, which is due Friday.