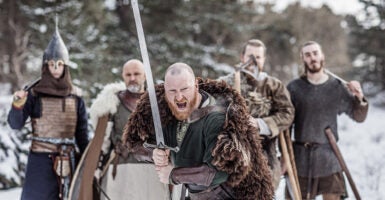 The left would rather make up an alternate history than face the reality that the past doesn't fit their desires. (Photo illustration: Lorado/Getty Images)

While it’s almost become cliché at this point to refer to the radical left’s antics using the language of George Orwell’s “1984,” the left’s ongoing assault against honest and accurate history makes Orwell’s tale look quaint in comparison.

A recent example of the leftist war on history concerns a book called the “The Bright Ages” and the ensuing kerfuffle over race in the medieval period.

The book reframes the collective understanding of the medieval period from the 400s to the 1400s as a dark and violent time and highlights the stories of nonwhite minorities and women in Europe, attempting to frame them in a larger role.

The New York Times reported that even though the book would seem to hit all the proper leftist checkmarks of centering on women and minorities, it still wasn’t enough.

“The language and core themes of the book don’t reveal brightness so much as ‘whiteness,’” wrote Mary Rambaran-Olm. Rambaran-Olm is a historian who focuses on race in early England.

Writing a book that aims to feature women and/or other marginalized figures demands a stepping outside of oneself that is not accomplished throughout this work. Simply naming women who remained subsidiaries in a patriarchal society, or referring to auxiliary figures who were Muslim, Jewish, Mongols, or pagans (never mind the near erasure of trans or queer folk) in order to demonstrate how Christianity developed is nothing less than Christian apologia.

In other words, the white men who wrote the book didn’t go far enough in explaining that it’s really women and minorities, and not the white natives, who really impacted Europe.

Recent attacks on history from radical leftist academics in publications intended mostly for other academics aside, historical revisionism is a plague currently infecting our entertainment and media landscape as well.

In an example from Hollywood, Robert Eggers’ new Viking epic “The Northman” received criticism from one pop culture website for not focusing on female Viking warriors. While there’s no compelling evidence to suggest female warriors or shield maidens existed in the Viking Age, that doesn’t stop the left from clamoring for more female representation in places they didn’t historically exist.

It’s a shame the left would rather lie and pretend history was always as diverse or enlightened as modern-day San Francisco instead of perhaps focusing on the great untold stories featuring real minorities from throughout history.

The story of Robert Smalls, a slave who stole a Confederate battleship, sailed his way to freedom, fought in the Civil War, and then became a congressman comes to mind as the type of story the left claims to want to see.

Never heard of him? Most people haven’t. So, why not tell that story instead of trying to pretend medieval England was ethnically diverse?

Sadly, this obsession with creating a nonexistent ethnically diverse antiquity has further consequences than just a lack of historical accuracy.

If minorities are constantly race-swapped into versions of real history, it ironically reinforces the idea that only white people matter and that the only way to get minorities into the limelight is by swapping out a white character.

How’s that for “white privilege”?

Leftists like to claim history is subjective. It is not. It is the lens through which we view history that is subjective. Whether you view George Washington as a glorious Pater Patriae or a vicious slave owner is a lens. That he fought the British, was the first president of the United States of America, and was buried at Mount Vernon are facts.

The left is currently trying to break the distinction between a fact and a lens.

No factual evidence exists that shield maidens were widespread? That goes against what I want, so I’ll just teach otherwise.

To come full circle, the left is indeed trying to control the past to control the future, as Orwell prognosticated. His book warns us just what a tragedy that would be.