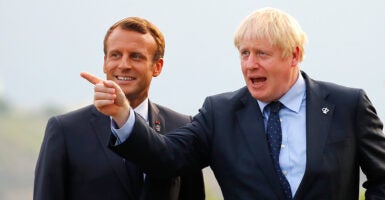 There’s a sickness emanating from America that seeks to contaminate all of Western civilization.

In the words of French President Emmanuel Macron, “Certain social science theories entirely imported from the United States” are responsible for fomenting a wave of sentiments critical of the French Republic.

It’s beyond dispute that many of these social science theories that Macron refers to were incubated by French academics, such as Jacques Derrida and Michel Foucault. Subsequently, these toxic ideas were taken by American thinkers and developed into a new, malignant strain, primed to be reintroduced to Europe.

A recent example of these social sciences at work occurred in France in April. According to Politico, the National Union of Students of France, a publicly funded student union, came under fire when it was discovered that the group had been explicitly banning white members from meetings.

Britain is also dealing with a cadre of radicals intent on tearing the country apart. The Winston Churchill Memorial Trust has rebranded as The Churchill Fellowship, a move that drew some criticism. The BBC reported that “Culture Secretary Oliver Dowden told LBC radio the charity was pandering ‘to a noisy woke brigade who are trying to challenge all aspects of our history'” and a spokesperson for British Prime Minister Boris Johnson “urged the charity to ‘think again and not try to re-write the past’,” saying “there is a never ending political debate about who is sufficiently pure and politically correct”. (The Trust maintains the name was changed to clarify its mission and notes Churchill remains part of the new name.)

Or take the University of Edinburgh’s recent efforts at “decolonization,” as detailed by The Telegraph. The college has told its computer science staff to “avoid using predominantly Western names such as Alice/Bob” as the school “must challenge and rework the current pedagogy, which was rooted in imperial and colonial ideas about knowledge and learning”

While the U.S. contends with its own plague of radical leftist ideas infecting the body politic, the scourge of anti-Westernism, embodied in values like critical race theory and postcolonialism, oozes from America’s shores to our allies across the Atlantic.

Thankfully, the French and British governments have been pushing back against the virulent tide of anti-liberalism

Contrary to the common American acquiescence to rabid student groups, the French response to the National Union of Students of France’s blatant racism was to call it out for its anti-liberal behavior.

In an interview with French TV station BFM, translated by the author of this piece, the national education minister of France, Jean-Michel Blanquer, said: “People who claim to be progressive and who … distinguish people by the color of their skin are leading us to things that resemble fascism.”

But it is in the U.K. where the government shines in coordinated action toward protecting the country’s heritage. Britain’s public officials have unequivocally condemned the iconoclasm and wanton defamation of the West that characterizes the radical left.

After a statue of prominent merchant and trader Edward Colston was torn down and thrown into a river by Black Lives Matter activists, former British Communities Secretary Robert Jenrick penned an op-ed for The Telegraph that argued that “baying mobs” ripping down controversial statues was unacceptable.

“There has been an attempt to impose a single, often negative narrative, which not so much recalls our national story, as seeks to erase part of it,” Jenrick wrote. “What has stood for generations should be considered thoughtfully, not removed on a whim or at the behest of a baying mob.”

The op-ed also served as a way to propose new legislation requiring building consent or planning permission to remove statues, rather than allowing woke activists to mandate the removal of statues they dislike. Additionally, the communities secretary would have final veto power.

According to Gardiner, “what the British are doing is a role model for a future American conservative government.”

Our friends and allies on the other side of the Atlantic have realized wokeness is a sickness that saps the strength of great nations and, if left untreated, can reduce them to rubble. They see the grim future prophesied by vile and hateful leftists and reject it wholeheartedly.

So too must America. With proper treatment, diseases can be fought and cured.

France and Britain have offered us a panacea. Time to take our medicine.

This article has been corrected to reflect the reasons provided by The Churchill Fellowship for its change of name and updated to include BBC’s reporting on reactions to the name change.