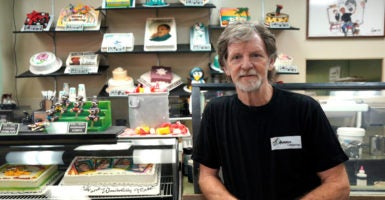 The Supreme Court is hearing the case of Jack Phillips this week, a Colorado baker who declined to bake a custom cake for a same-sex wedding. (Photo: Rick Wilking/Reuters/Newscom)

Zachary Jones is a member of the Young Leaders Program at The Heritage Foundation.

Jack Phillips is a Christian baker from Colorado. Should he be forced to bake a cake for a same-sex wedding in violation of his deeply held religious beliefs?

A group of leading legal scholars and economists says “no.” Not only would this violate Phillips’ individual conscience, it would also violate the Constitution and have negative ripple effects on both society and markets.

In their briefs, the scholars urge the court not to use public accommodation laws to compel private citizens to agree with the government on the issue of same-sex marriage.

The 34 legal scholars ask the court to protect Phillips from the government of Colorado, which seeks to force him to speak a message that he doesn’t believe by designing a cake in support of same-sex marriage.

Citing the Constitution as protecting Americans’ freedom of speech and religious liberty, the scholars contrast the American Founders’ commitment to freedom with that of other societies in the past that punished religious believers for following their consciences.

The scholars recall Thomas Jefferson’s admonition that it is “sinful and tyrannical to compel a man to furnish contributions of money for the propagation of opinions which he disbelieves.”

And they contrast it with one of the most famous examples of forced worship in history: the biblically recorded story of King Nebuchadnezzar of Babylon, who ordered three young Jewish men to bow down to a golden statue or risk being thrown into a fiery furnace.

There are plenty of other examples of odious forced worship throughout history. But America has repeatedly rejected compelled speech, as in the landmark case West Virginia State Board of Education v. Barnette, when the Supreme Court struck down a rule that compelled students to salute the American flag, even if it violated their religious beliefs.

That’s because the whole point of the First Amendment is that “the government may not prohibit the expression of an idea simply because society finds the idea itself offensive or disagreeable,” as the Supreme Court ruled in Texas v. Johnson.

The legal scholars argue that protecting Phillips from being compelled to express a message that violates his religious beliefs benefits all Americans because “a person … who is comfortably in harmony with prevailing opinion one year may … [be in the] minority the next year.”

They warn against repeating errors from the past by applying nondiscrimination laws in such a way as to exclude traditional marriage supporters from the public square because they do not conform to the new orthodoxy of same-sex marriage.

Girgis, in his own brief, adds that the Supreme Court cannot suppress speech only because it offends people, even if it does so with the best of intentions. To do so would violate the purpose of the First Amendment, that citizens are free to hold even unpopular beliefs without government intervention.

While the court has forbidden discriminatory conduct like segregation, it has never silenced or coerced speech in the enforcement of public accommodation laws. In fact, in two landmark cases dealing with public accommodations and LGBT individuals, Boy Scouts of America v. Dale and Hurley v. Irish-American Gay, Lesbian, & Bisexual Group of Boston, the Supreme Court protected freedom of association and speech.

In these cases, the court determined that in New Jersey and Massachusetts, respectively, the states could not “interfere with speech” to eradicate “biases” against LGBT people—even if the court’s goal were to “promot[e] an approved message or discourage[e] a favored one, however enlightened either purpose may strike the government.”

And in the case of Phillips, there is no need to discourage any anti-gay bias, because he has none. Unlike in the Jim Crow era, where laws were “about avoiding contact on socially equal terms with African-Americans, by refusing them any service,” Phillips does no such thing. He welcomes all customers into his store, including people of all sexual orientations.

Girgis also points out that both the current social context and history attest that “Phillips’ convictions need not reinforce or rest on any assumptions about LGBT people’s basic abilities, interests, character, or proper place in society.” Upholding Phillips’ right not to endorse same-sex marriage through his creative expression would not promote demeaning ideas about LGBT people.

Phillips simply can’t create custom cakes that express messages that conflict with his moral and religious beliefs. That’s why he has declined orders for cakes celebrating divorce, lewd bachelor parties, and a birthday cake for Satan.

Writing in a separate brief, the 14 economics scholars point out that forcing Phillips and others to bake same-sex wedding cakes is unnecessary because plenty of businesses will provide the products elsewhere. LGBT individuals have ample access to these goods and services.

Since the wedding industry is comprised of smaller vendors, it is difficult for any vendor to obtain a monopoly on the market. The market tends to provide for everyone’s needs, without government intervention or coercion.

Market forces also discourage vendors from refusing service to an entire group of customers, because doing so would forfeit valuable profit. And, market forces encourage businesses to tailor products to certain niche clientele, like same-sex couples.

This is why online services like Pridezillas.com have sprung up to help customers locate LGBT-friendly or LGBT-exclusive wedding vendors. This is also why Fortune 50, 100, and 500 companies have implemented LGBT anti-discrimination policies and publicly align themselves with same-sex marriage.

In Colorado, 20 cake artists offered cakes to the same-sex couple who obtained a rainbow-layered wedding cake—and did so for free.

If vendors who have conscience objections stay in business, they may be a poor fit for same-sex couples, due to their personal reservations and fear of legal retaliation. But they could be a good match for customers who hold similar values, or who simply prefer their product.

Forcing businesses like Masterpiece Cakeshop to choose between compromising their values or shutting down does more harm than good. Phillips lost 40 percent of his store’s income and had to let several employees go. Similar coercive government action will cause other businesses to let their employees go.

In addition, driving businesses like Masterpiece Cakeshop out of the market will reduce consumer choice and result in an overall decrease of social welfare. When markets respect individual conscience, it optimizes the possibilities for everyone to be served and satisfied.

The court has never applied public accommodation laws to overrule an individual person’s conscience by forcing them to speak a message, as Colorado has done to Phillips.

These actions are unconstitutional, and they pose significant social and economic harms to society. Therefore, the Supreme Court has multiple reasons for upholding Phillips’ First Amendment freedoms.