He Knows Communism Well. It’s What Made Him a Conservative. 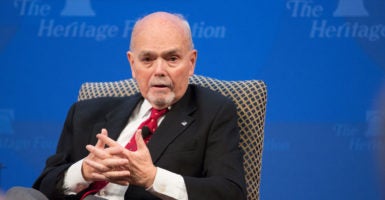 If you consider yourself a conservative, have you ever thought about why? How would you answer someone who asked you to explain the reason?

Maybe you’ve never thought about it before. It might be because your parents were conservative, and you absorbed your political outlook from them. Or perhaps you read and thought your way into the movement, the way Ronald Reagan did years before he became president.

Or perhaps there was a moment that shook you and made you look at the world differently.

That’s what happened to Lee Edwards. The author of more than two dozen books, Lee is a good friend of mine, hailed by many as the unofficial historian of the conservative movement.

At a recent event marking the release of his latest book, “Just Right,” I asked him why he’s a conservative. Was it because of his father, himself a famous writer?

“No,” Lee promptly replied. “I’m a conservative because of communism.”

It may be hard for many young people today, years after the Cold War has faded from memory and headlines, to understand what it was like to watch communism advancing after World War II.

Years of bloody combat had been spent defeating Hitler’s Germany and Imperial Japan—and yet freedom was once again under attack.

>>> COMMENTARY: Why We Fought the Cold War

Lee pointed to a catalyst moment. It was October 1956. He was in Paris and fresh out of the Army:

“All of a sudden, we began hearing these bulletins from Budapest, and it was the Hungarian Revolution. And here were young men and women of my age standing up to the Soviets. Standing up to Soviet tanks and Soviet guns.

“And I was so excited about this—caught up in the courage and the bravery and the desire for freedom of these young Hungarians. And then, two weeks later, the Soviet tanks came back—firing, shooting, killing maybe 20,000 young Hungarians, and then a couple hundred thousand more Hungarians fleeing into exile, because the Soviets were not going to let go of that country.

But his wait was in vain. “And I was embarrassed. I was ashamed. I was angry. And I resolved at that point that I would do whatever I could for the rest of my life to oppose communism and to help those who were resisting it as well.”

The results of that lifelong fight for freedom are beautifully chronicled in Lee’s new memoir. For years, he’s been using his consummate writing skills to profile leading figures in the conservative movement.

If you want to understand Barry Goldwater, Reagan, and William F. Buckley from an “insider” perspective, check out his remarkable biographies of these men—and see why The New York Times dubbed Lee “the Voice of the Silent Majority.”

But Lee has done more than write. At a time of great national unrest, he organized the largest public demonstration in support of our troops in Vietnam.

He also created the Victims of Communism Memorial in Washington, D.C., which was dedicated by President George W. Bush on June 12, 2007, the 20th anniversary of Reagan’s “Tear Down This Wall” speech.

It wasn’t easy. The federal bureaucracy grinds slowly even on a good day, and more than a decade had passed since Congress had authorized the memorial. But Lee, no doubt remembering the victims of the Hungarian Revolution, saw it through with his usual patient professionalism.

Now, at a time when the question of what it means to be conservative is in even greater flux, Lee’s optimistic and trenchant analysis is more important than ever. He’s spent “a life in pursuit of liberty,” he writes.

Armed with his keen insights, let’s hope the same can be said of the rest of us.