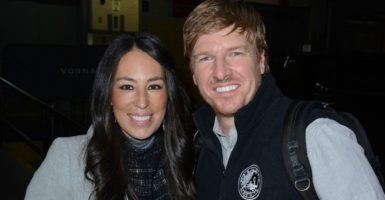 We have no idea what HGTV's Chip and Joanna Gaines personally think about same-sex marriage, but they're under attack for what their pastor preaches. (Photo: Evereta Collection/Newscom)

Like many Americans, HGTV stars Chip and Joanna Gaines attend a church where the pastor thinks homosexual behavior is a sin.

BuzzFeed printed the original story, headlined “Chip And Joanna Gaines’ Church Is Firmly Against Same-Sex Marriage.” From there it was picked up by Cosmopolitan, Us Weekly, and my favorite, Jezebel.

So we don’t know for sure what the Gaineses’ beliefs are on same-sex marriage. (And incidentally, this attitude it’s news that something like a pastor at a Christian church preaching that same-sex marriage isn’t OK  is exactly the kind of out-of-touchness that helped create a climate where Donald Trump could become president.) But here’s the clincher: The couple, whose popular HGTV show is called “Fixer Upper,” has fans that may not agree with their views on same-sex marriage!

“‘Fixer Upper’ has fans of all stripes: Christians, feminists, and LGBT viewers have all found something to love in the Gaineses,” writes Buzzfeed’s Kate Aurthur. “So in the absence of a response from them or their representatives, it’s worth looking at the severe, unmoving position Seibert and Antioch take on same-sex marriage.”

If I limited my celebrity engagement to those who agreed with me, I’d … well, actually I’m blanking on who exactly I could watch star in movies, listen to as they sing, or see reality shows about. If you’re a conservative in America, you’re pretty used to knowing that your favorite celebrities will regularly disagree with you on everything from abortion to LGBT matters to climate change.

But somehow if you’re liberal you can like only the celebrities who agree with you on absolutely every matter?

So in other words, even if you don’t know that you’d want to attend church with Chip and Joanna (whose cute interactions with each other are pretty much peak inoffensive as well), there shouldn’t be anything that bars you from enjoying their home-improvement show.

And let’s go over their beliefs. Sure, support for same-sex marriage has risen in America in recent years. But that hardly means everyone is on board.

According to Pew Research Center, as of 2016, 37 percent of adults in this country still oppose same-sex marriage, while 55 percent approve. That means over a third of Americans are still against same-sex marriage.

So the Gaineses’ view (if they share the same perspective on homosexuality as their pastor) is actually shared by a substantial chunk of Americans, particularly Christians.

In contrast, Americans tend to think a whopping 23 percent of the population is LGBT. That’s not shocking, given how much media and entertainment go out of their way to highlight such couples—but it does suggest it’s possible that the Gaineses haven’t been inundated with applications from same-sex couples.

Or maybe they haven’t because the Gaineses (again, assuming they do agree with their church, which is hardly a definite) view decorating homes as a form of artistic expression and if they don’t agree with same-sex marriage, they may not want to decorate a home for a same-sex couple.

Well, when fashion designer Sophie Theallet announced in November she would so not be dressing Melania Trump because the “rhetoric of racism, sexism, and xenophobia unleashed by her husband’s presidential campaign are incompatible with the shared values we live by,” that was hardly met by a deafening roar from the left about Theallet’s outrageousness to limit herself to customers who she agrees with.

In fact, as The Federalist’s Mary Katharine Ham’s piece was amusing titled, “Refusing To Serve Customers You Don’t Agree With Is Suddenly Cool Again.”

And that should be terrifying, not just to Chip and Joanna Gaines, but to everyone who values a country where freedom of thought and values is permitted.