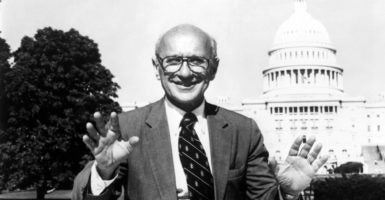 "There is no alternative way, so far discovered, of improving the lot of the ordinary people that can hold a candle to the productive activities that are unleashed by a free enterprise system," said economist Milton Friedman. (Photo: Everett Collection/Newscom)

The Trump administration continues to move on its campaign promise to restructure the North American Free Trade Agreement, with round five of NAFTA negotiations starting last week.

In the heat of the discussions between officials from the United States, Canada, and Mexico, it’s easy to lose sight of the benefits that free trade affords all Americans.

Milton Friedman—one of the most influential economists of the 20th century—summarized it best. In an interview with talk show host Phil Donahue, Friedman stated:

In the only cases in which the masses have escaped from the kind of grinding poverty you’re talking about, the only cases in recorded history are where they have had capitalism and largely free trade. If you want to know where the masses are worst off, it’s exactly in the kinds of societies that depart from that.

So that the record of history is absolutely crystal clear that there is no alternative way, so far discovered, of improving the lot of the ordinary people that can hold a candle to the productive activities that are unleashed by a free enterprise system.

While free trade has brought countless people and families out of poverty, its benefits are not confined to how it enhances economic mobility. Free trade also improves financial standing, and allows people to spend their money as they see fit while reaping the benefits of mutually beneficial commercial transactions with economically free counterparts in other nations.

A just released Heritage Foundation report by Bryan Riley and one of us (Patrick Tyrrell) finds that free trade is widely associated with higher incomes, greater food security, a healthier environment, and more political stability, as this chart shows:

By contrast, when the government interferes with free trade, it infringes on individuals’ and families’ abilities to choose the own best paths forward. People choose the best path forward for themselves more wisely than governments do, in part because people know much more about their own situations than a government can. Just look at the economies of countries where economic freedom is low to see this proved.

Americans should continue to fight for the freedom to trade as their forefathers did back in the American Revolution. Free trade lifts people out of poverty, but it also creates more prosperous and stable countries, America being a shining city on a hill among them—in large part because of the freedom to trade.