She Flipped Off the President and Lost Her Job. Then, the Left Bailed Her Out. 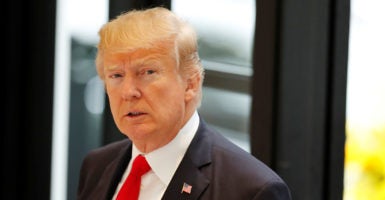 Juli Briskman made an obscene gesture at the president's motorcade, lost her job, and then received over $123,000 from sympathetic online donors. (Photo: Jorge Silva/Reuters/Newscom)

A photo of a Virginia woman saluting President Donald Trump’s motorcade with a middle finger got her fired from her job after it went viral—but rather than being embarrassed or even ashamed, she’s savoring her 15 minutes of fame.

That’s as you might expect, alas, given the political and cultural zeitgeist of the day.

“All my frustration about this administration just welled up inside me. It felt great,” Juli Briskman explained to interviewer Megyn Kelly on NBC’s “Megyn Kelly Today” show.

The presidential press pool shot seen around the world after it was posted online has turned Briskman, 50, of Sterling, Virginia, into a “she-ro” of the unhinged anti-Trump left.

Briskman may be out of work after she was fired from her job with Akima LLC, a government contracting firm, but she hardly has to worry about where her next meal will be coming from.

When the news broke, a Hudson, Massachusetts, man on Nov. 6 took it upon himself to create a GoFundMe.com crowdsourcing account online to assist Briskman financially. In the two weeks since, as of Nov. 21, it has garnered pledges totaling $123,351 from 5,490 donors nationwide.

Nice work, if you can get it. It surely beats the heck out of standing in the unemployment line and then having to explain to the clerk there why she lost her job.

With that $120,000-plus from the “Thank You, Juli Briskman” fundraiser, she will easily be able to take a long, leisurely vacation and a year (or two) off while she weighs the scores of job offers that she says she has received since she was identified as the woman in the photo.

“Through your generous donations, heavy burdens have been lifted,” Briskman is quoted as saying on the GoFundMe page. “Thank you!”

Briskman should actually thank the White House press pool lensman who took the photograph of her flipping the bird as she rode her bicycle alongside the motorcade as it left Trump’s golf course in Sterling late last month.

About a week later, Briskman “outed” herself as the bird-flipper in the photo, which was taken from behind and didn’t show her face. She used the snapshot as her profile photo on Facebook and Twitter.

She then chose to inform the HR department at work about it, whereupon she was shown the door the next day, told that she had violated the company’s social media policies.

It didn’t matter to her employer of six months, Herndon, Virginia-based Akima, that she had done the “bird-dropping” on her own time or that her social media accounts didn’t mention her affiliation with the company.

The left’s lionization of Briskman didn’t stop at riding to her financial rescue, however. A petition at MoveOn.org—dubbed “Justice for Juli”—calls on Akima to give her her job back or “compensation for her hostile, unwarranted termination.”

By way of contrast, we don’t recall anyone on the right fighting for “justice” for James Damore, much less providing him with a golden parachute or petitioning Google to get his job back.

Damore, 28, was the software engineer and self-described computer nerd famously fired for nothing more than circulating an internal 10-page memo that questioned the tech giant’s politically correct diversity efforts.

>>> Why Did Google Freak Out and Fire an Employee for Spurring ‘Honest Discussion’?

Damore suggested that the low number of women in technical jobs at Google and elsewhere in Silicon Valley was a result not of discrimination, but rather, of psychological differences between the sexes. He was fired for “advancing harmful gender stereotypes.”

Unlike the flood of job offers Briskman says she has received, Damore told the Guardian newspaper of London in an interview published Nov. 17 that he is still unemployed and fears he has been “blacklisted” by the high-tech industry.

In the culture of the not-so-tolerant left, questioning PC orthodoxy is far more offensive, apparently, than giving the middle finger.

Turning Briskman into a heroine represents yet another example of the left’s coarsening of the culture—if not what author Diana West in her 2007 book of the same name called “The Death of the Grown-Up”—with Briskman’s incivility in effect being rewarded, and handsomely.

As such, it’s no surprise that the ACLU of Texas rushed to offer to defend a Houston-area woman who was briefly threatened with a charge of disorderly conduct last week by the sheriff of Fort Bend County, Texas.

That was because Karen Fonseca’s pickup truck sports an oversized sign in its rear window that reads “F— Trump and f— you for voting for him.”

So, the entropy of public morality continues apace. Where it stops, nobody knows.