Homeland Security Will Soon Have a Tough, Smart Leader at the Helm 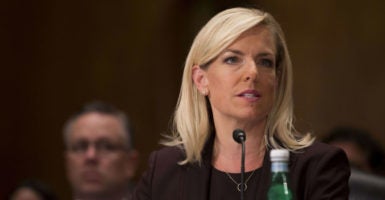 Kirstjen M. Nielsen, the nominee to be the next secretary of homeland security, was approved by the Senate Homeland Security and Governmental Affairs Committee Tuesday.

In her earlier confirmation hearing, Nielsen proved to the committee and the broader public what many already know—that she is well-prepared to take on the hard task before her.

Neilsen adeptly handled topics ranging from the opioid crisis to cybersecurity workforce issues to enforcement of U.S. immigration law. She demonstrated knowledge not just of the many policy issues facing the Department of Homeland Security, but also a deep understanding of the department and the roles of its various components that were pieced together from 22 different agencies after 9/11.

It’s natural that Nielsen would have this knowledge. She would be the first secretary of the department to have previously worked in its ranks, having served at the Transportation Security Administration. She also worked on the Bush administration’s Homeland Security Council, handling disaster preparedness and response.

Since that time, she worked as a senior fellow at George Washington University’s Center for Cyber and Homeland Security and started her own homeland security consulting firm, where she developed an expertise in cybersecurity issues.

Most recently, she worked as the Department of Homeland Security’s chief of staff under then-Secretary John Kelly, before following him to the White House to become deputy chief of staff.

These experiences have served Nielsen well and will continue to do so—there is little doubt she will be confirmed.

Fixing broken policies will not be easy, but Nielsen is the right person for the job.