Crossing the Border Illegally Is Harder Than It’s Been in 50 Years, DHS Report Says 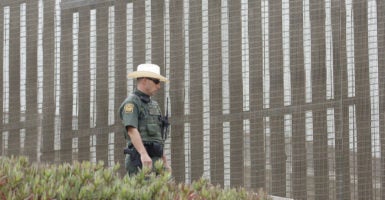 Border Patrol assessments using interdiction rates show that 55 to 85 percent of illegal crossers are apprehended or interdicted today versus 35 to 70 percent a decade ago. (Photo: John Gastaldo/ZUMA Press/Newscom)

Improved security has made it harder than ever to illegally cross into the U.S. from Mexico, and Border Patrol agents are catching a higher percentage of those who try, according to a new report from the Department of Homeland Security.

The report from the DHS Office of Immigration Statistics used arrest and migrant survey data to arrive at estimates on a wide range of border security metrics, including apprehension and deterrence rates, the annual number of illegal entries, and average smuggling fees charged to migrants.

Since 2000, the report found, Border Patrol agents have become more efficient in interdicting illegal border jumpers, leading to a precipitous drop in successful illegal crossings and an equally sharp rise in the cost of obtaining services from human smugglers, known as “coyotes.”

Border security improvements began during the second George W. Bush administration and continued with varying degrees of success under President Barack Obama. The gains have continued under President Donald Trump, with border arrests down about 22 percent in fiscal year 2017 compared to the same period in fiscal year 2016, despite a recent uptick.

The report sheds light on how much more effective security on the southwest border has become since 2000, when there were an estimated 1.8 million successful illegal crossings. It also suggests that Trump may have difficulty convincing Democrats and some skeptical Republicans in Congress to fund his proposed border wall, given the marked improvements in border security that have been made without a barrier along the 2,000-mile border.

Illegal immigration trends are typically evaluated by looking at changes in the number of apprehensions along the border, the idea being that fewer arrests correlates to a smaller number of migrants slipping across the border undetected. It is an imprecise method of measuring the effectiveness of border security because it doesn’t incorporate apprehension rates or the number of potential migrants who were deterred from crossing in the first place.

The DHS report addresses those shortcomings by looking at a metric called the total interdiction rate, which accounts for the number of illegal immigrants known to have successfully skirted the Border Patrol, plus an estimated number that likely crossed and evaded capture. Border Patrol assessments using interdiction rates show that 55 to 85 percent of illegal crossers are apprehended or interdicted today versus 35 to 70 percent a decade ago.

It also appears that far fewer illegal immigrants who have been deported attempt to cross the border a second time than was previously the case, according to the report. Today, enhanced border security deters about 55 to 75 percent of would-be second-time offenders, versus 10 to 40 percent a decade or two ago.

More effective border enforcement and a stronger deterrent effect have led to a historic drop in the number of estimated successful illicit border crossings. DHS estimates there were about 170,000 illegal crossings in 2016—91 percent fewer than in 2000, when an estimated 1.8 million illegal aliens successfully crossed the border between ports of entry.

Based on those figures, illegal immigration across the U.S.-Mexico border is certainly under tighter control than it has been at any point this century, and probably going back more than 50 years.

“With respect to border enforcement outcomes, available data also indicate the lowest number of illegal entries at least since 2000, and likely since the early 1970s,” the report said.